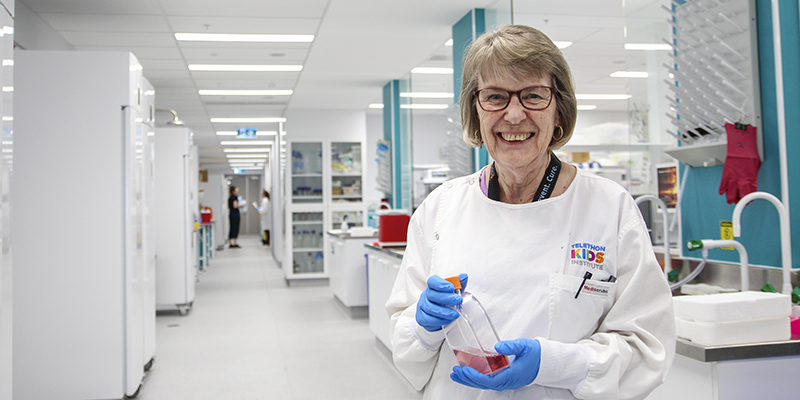 The Telethon Kids Institute has farewelled one of its most treasured employees, with research officer Jette Ford closing the door on a quietly stellar 37-year career which has changed the face of cancer research in WA and around the world.

Jette Ford began her research career at the Research Unit in Princess Margaret Hospital in January 1984, part of a two-person team alongside Professor Ursula Kees, now retired, who had been entrusted with creating Western Australia’s first paediatric cancer research program.

Cell lines – essential tools in the ongoing global effort to better understand and find new, gentler therapies to beat cancer – are notoriously difficult to establish, however it quickly transpired that Jette had the knack. She would go on to coax 116 paediatric cancer cell lines into life over her time at the Institute – a feat few can match.

“She’s literally a legend,” said Brain Tumour Research co-head Dr Nick Gottardo, who among others who are now cancer research leaders learned everything he knows about lab work and cell culture from Jette.

“She has probably cultured more cancer cell lines than anyone else in the world. I would be surprised if there’s anyone ahead of her,” he said.

Professor Kees said Jette had been an exceptionably hard worker who, from the start, had displayed a unique patience, dedication and insight into cells.

“Her dedication and success rate are second to none,” she said.

Dr Rishi Kotecha, co-head of Leukaemia and Cancer Genetics, said Jette was leaving an incredible legacy which would allow the Institute’s cancer research to continue long into the future.

“Cell lines are unique models that allow researchers to do a great deal of scientific work, including drug testing and screening to try and identify new treatments for, in our case, children with cancer,” Dr Kotecha said.

“Without the vast number that Jette has established, we wouldn’t have been able to do a fraction of the research we’ve undertaken at Telethon Kids.

“But Jette hasn’t just produced these cell lines for our use here – we’ve sent them all over the world, to other parts of Australia, to the UK, America, Europe, parts of Asia – where other researchers are also using these resources to try to improve outcomes for children with cancer.

“Her work is not just renowned locally, it’s renowned nationally and internationally, so she’s had a really important role in cancer research over the last 30 years or so.”

Over the course of her career Jette has been part of not only the birth of the Telethon Kids Cancer Centre and the Telethon Kids Institute – following it through its various name and location changes – but has watched the Institute grow from just a handful of employees to the 1,000-strong powerhouse it is today.

In that time she has also overseen the arrival and management of a growing array of cutting edge technologies – including the first liquid nitrogen tank in Western Australia – and built and cared for the Institute’s extensive biobank of paediatric cancer samples. According to lab records, her handwriting appears on at last 9,000 samples – some going back to 1984.

Throughout it all, the work she and Professor Kees pioneered – focused predominantly on leukaemia but also other paediatric cancers – has been generously supported by the Children’s Leukaemia and Cancer Research Foundation.

A respected mentor for countless students, researchers and a number of notable clinician-researchers, Jette has only ever had two bosses: Professor Kees, who retired in 2017, followed by Professor Kees’ successor and Jette’s one-time apprentice, Dr Kotecha.

This isn’t the first time she has retired – the first time was in 2005, not long after she turned 60. She quickly grew bored, however, and within a year was back, tending to her cells.

Now a great-grandmother, she insists this time her retirement is going to stick.

“I think that’s enough now, I really do,” she said.

“There’s not many people that you could call an institution of the Institute but Jette is one of them,” Professor Carapetis said.

“Thirty seven years is pretty extraordinary, to the point where she actually retired, and then missed her cells and came back. So that’s dedication that you don’t see very much.

“I want her to really understand that we celebrate what she’s done for the Telethon Kids Institute, that we so value the loyalty and the durability of her contribution.”