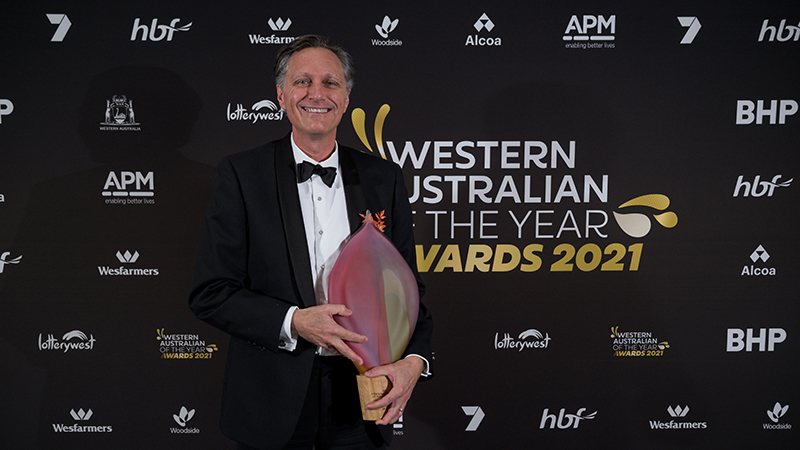 Congratulations to Telethon Kids Institute Director Professor Jonathan Carapetis AM, who last night won the Professions Award at the 2021 Western Australian of the Year Awards.

Professor Carapetis was recognised for his role as a world-leading expert on Strep A infections and rheumatic heart disease, his commitment to improving Aboriginal health and building capacity within the Aboriginal research sector, his wider leadership in the medical research sector, and the leadership role he has taken in providing a reassuring voice for the community throughout the COVID-19 pandemic.

Professor Carapetis, who has also been President of the Australian Association of Medical Research Institutes since August 2019, said he was honoured to receive the award and saw it as recognition of the importance of the medical research sector to the State and, especially, to the health and wellbeing of Western Australian children.

“Western Australia is a great place to be a kid but the reality is far too many are missing out,” he said.

Given that children are our future, we need to keep working to make sure WA gives all kids the best possible start in life.

“Western Australia also needs to genuinely celebrate its First Nations people. The Aboriginal culture and history of this state bring a richness that elevates all of us.”

Since joining the Telethon Kids Institute as Director in 2012, Professor Carapetis has driven transformational change, pioneering a new blueprint for medical research that is community and outcomes-focused, cementing the Institute’s position as one of Australia’s leading institutes. Under his leadership, staff and student numbers have grown to more than 1,000 and Telethon Kids has become a destination for some of the world’s best researchers.

Professor Carapetis is a tireless advocate for children and young people, has spearheaded new relationships with WA Aboriginal communities to address their priorities, and has been a champion for increased equity and diversity within the research sector.

Three other Telethon Kids researchers were recognised at last night’s awards, as finalists in their respective categories.

Professor Juli Coffin, Ellison Fellow of Aboriginal Health at Telethon Kids Institute and a proud Aboriginal woman from the Pilbara, was a finalist for the Aboriginal Award in recognition of her outstanding and creative leadership in enhancing the lives of Aboriginal children and young people.

Professor Coffin, who as a former elite water polo player was the first Aboriginal player to represent Australia nationally, currently leads Yawardani Jan-ga, an innovative research project and Equine Assisted Learning (EAL) program based in the Kimberley (currently in Broome and Derby, and developing in other parts of the region). The program pairs Aboriginal young people with horses as a way of enhancing social and emotional wellbeing, healing trauma, and building leadership skills.

Dr Shannon Simpson, who is Head of Children’s Lung Health at the Wal-yan Respiratory Research Centre, based at the Institute, was a finalist for the Community Award in recognition of her internationally respected work in the area of preterm lung health and her passionate commitment to giving back to community in a variety of volunteer roles.

More than 15 million babies are born preterm annually, with many facing lifelong consequences from devastating stays in intensive care. Dr Simpson’s work has laid the groundwork for better therapies, clinical practice and follow-up that has had a huge international impact on how these cases are managed.

Child health researcher Dr Hayley Passmore was a finalist for the Youth Award for her work in helping to improve outcomes for some of WA’s most vulnerable young people – those involved in the justice system and who have neurodevelopmental impairment such as Fetal Alcohol Spectrum Disorder (FASD).

As part of the ground-breaking Banksia Hill Project, Dr Passmore pioneered Reframe, a workforce training intervention to help justice staff better manage and support young people with neurodisability. This well-received training program has been shown to change the way frontline justice staff recognise and respond to the needs of young people in detention and is in demand from other WA government departments and justice departments in several other states.

Read more about the awards here.