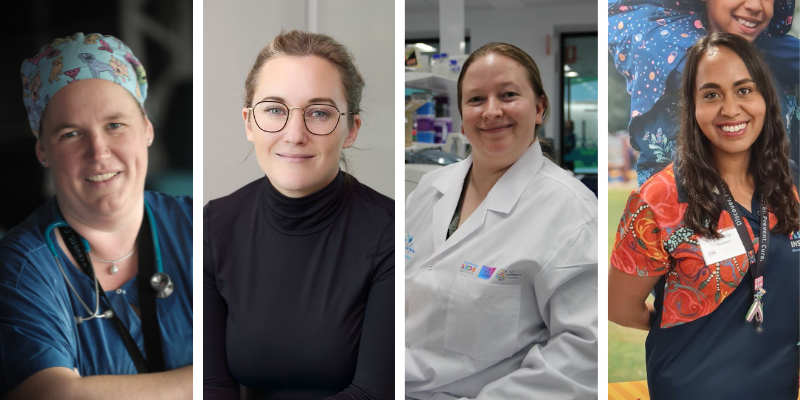 Four Telethon Kids Institute researchers – working across diverse fields including paediatric anaesthesia, bioinformatics, ear health, and the health impacts of biodiesel exhaust – have been named as finalists in the 2021 Premier’s Science Awards.

Professor Britta Regli-von Ungern-Sternberg is a finalist for 2021 Scientist of the Year for her work helping to reduce complications connected with paediatric anaesthesia – a high risk specialty aiming to prevent significant long-lasting harm and improve outcomes for vulnerable patients.

Professor Regli-von Ungern-Sternberg is Team Leader of Perioperative Medicine at Telethon Kids Institute, a consultant paediatric anaesthetist at Perth Children’s Hospital, and Chair of Paediatric Anaesthesia at The University of Western Australia. Her research and advocacy, focused on better predicting, understanding and reducing risks associated with anaesthesia for babies and children, aims to ensure that when a child needs a vital operation, it is as safe and pain-free as possible.

Her findings have challenged prevailing dogma around paediatric anaesthesia, changed clinical practice, and led to a decline in complications in paediatric patients undergoing surgery. One research project led by Professor Britta Regli-von Ungern-Sternberg – the REACT trial involving 484 Australian children – found that using a simple asthma medication prior to surgery significantly reduced breathing problems in children undergoing tonsillectomy. This practice has since been incorporated into global clinical guidelines.

Ms Troy’s research uses cutting-edge bioinformatics to better understand the immune response to respiratory viral infections in asthma and has the potential to help reduce hospitalisations in babies who have lower respiratory infections.

Her work has provided critical evidence for how bacterial therapeutics can be used to harness the innate immune system to protect against severe lung infections in infants, and is helping to place Western Australia at the forefront of the global race to identify safe therapies for lower respiratory infections during the high-risk postnatal period.

PhD candidate Katherine Landwehr – of the Wal-yan Respiratory Research Centre and Curtin University – is also a finalist for ExxonMobil Student Scientist of the Year for her research into the toxic health impacts of exposure to biodiesel fuel.

Use of biodiesel fuel – a type of renewable biodiesel that can be made from almost any fat or oil – as an alternative to increasingly expensive mineral diesel is growing worldwide, but with children among those most at risk from air pollution exposure due to their still growing lungs, it is vital that the right type of biodiesel is chosen for future use so health impacts can be minimised.

Prior to Ms Landwehr’s PhD it was unknown if the health impacts of biodiesel exhaust exposure changed depending on the oil used. Her research has, for the first time, shown there is a spectrum of toxicity related to the chemical properties of fuel – with canola emerging as the least toxic biodiesel tested and tallow, or beef fat, as the most toxic (with even more toxicity than mineral diesel). Ms Landwehr’s work has also provided critical evidence to facilitate the establishment of diesel exhaust monitoring and exposure limits in Australian occupational settings.

Emerging child health researcher and Whadjuk Yued woman from the Noongar Nation, Danielle Headland, is a finalist for Shell Aboriginal STEM Student of the Year. Ms Headland is an Aboriginal Research Officer with the Telethon Kids Institute Ear Health Team who is passionate about improving the health and wellbeing of Aboriginal communities by inspiring Aboriginal young people to pursue further education and consider a career in STEM.

Having completed a Bachelor of Health Science at The University of Western Australia, Ms Headland is now undertaking a Graduate Certificate in Population Studies through UWA, while simultaneously supporting research aimed at improving the ear health of Aboriginal children. Her previous work at the Institute has involved supporting lung health projects in Aboriginal community engagement, recruitment and cultural safety.

Ms Headland has undertaken a range of mentorship, leadership, capacity-building and community roles including as Chair of the Telethon Kids Aboriginal Staff Network, Student Ambassador for the Aspire program at UWA, Mentor with the Aurora Education Foundation’s Aboriginal High School Program, a volunteer at the Telethon Kids Discovery Centre – an initiative aimed at getting children excited about a career in science – and fundraising for cancer research.

Winners of the 2021 Premier's Science Awards and the Western Australian Science Hall of Fame inductee will be announced at a ceremony at WA Museum Boola Bardip during National Science Week, which runs from August 14-22.

For more information on the Premier's Science Awards, including the list of finalists, please visit http://www.jtsi.wa.gov.au/scienceawards.