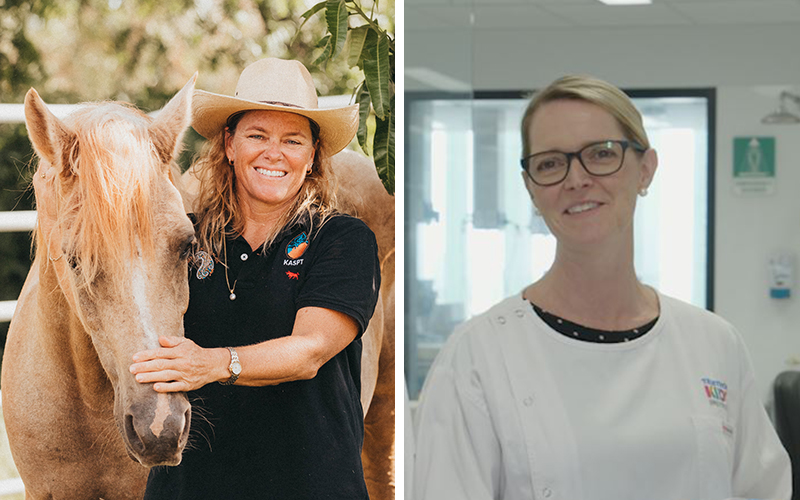 The program is already under way in Broome following a successful pilot in Geraldton, with the team planning to implement and evaluate it in multiple sites across the Kimberley.

“Our intervention delivery approach has been co-developed alongside Aboriginal communities and is underpinned by Aboriginal leadership, cultural governance, and the use of trauma-sensitive and culturally secure research methods,” Professor Coffin said.

“Findings will build an evidence base that informs policy and practice, by gaining a comprehensive understanding of key intervention elements of social and emotional wellbeing support for Aboriginal youth, how to incorporate Aboriginal worldviews across different stages of interventions, and how to best capture impact using culturally secure methodology.”

In a separate grant, a research team led by Dr Lea-Ann Kirkham, Co-Director of the Wesfarmers Centre of Vaccines and Infectious Diseases, secured $1.18 million to trial an immunobiotic nasal spray as a way of preventing respiratory infections.

Having discovered a ‘friendly’ bacteria that can be applied up the nose to prevent ear infections and influenza, the team will now trial the approach in humans for the first time, testing the immunobiotic in healthy adults using a non-invasive, low-cost nasal spray.

“We have evidence to suggest that this immunobiotic stimulates the innate immune system and primes it to respond to the next assault, in a process called ‘trained immunity’,” Dr Kirkham said.

“Our vision is to deliver a safe, low-cost, non-invasive therapy to reduce the global burden of respiratory infections in adults and children.”

Telethon Kids Institute Director Professor Jonathan Carapetis congratulated Professor Coffin and Dr Kirkham on beating out stiff competition to rate among the top 10 per cent of research applications nationally. He noted that both projects were excellent examples of the use of innovative research to tackle important issues.

“We’re increasingly aware of the inadequacy of existing social and emotional wellbeing programs and services for Aboriginal children and young people, who experience disproportionate rates of youth suicide, detention and imprisonment,” Professor Carapetis said. “Many of these services are aligned with Western values and conceptions of mental health – a fact that acts as a significant uptake barrier for Aboriginal communities.

“Juli and her team’s work with Aboriginal young people is not only innovative in using equine therapy to tackle mental health issues and enhance social and emotional wellbeing, but importantly it has been co-developed with Aboriginal communities, is led by Aboriginal practitioners, and takes a trauma-sensitive, culturally responsive approach.

“We hope this project will help to build an evidence base that informs future policy and practice in a way which incorporates Aboriginal worldviews, is culturally secure, and is more attuned to the needs of Aboriginal young people.

“Lea-Ann’s team is taking a novel approach to the problem of respiratory infections, which cause millions of deaths and countless cases of illness globally each year. While there are vaccines against some respiratory pathogens, they don’t offer protection against all respiratory illnesses.

“Preventative therapies that can offer broad protection against a range of respiratory diseases are thus keenly sought and the team’s approach of using a non-invasive, nasal immunobiotic to train the immune system offers an exciting way forward.”

The research teams to receive the grants through The University of Western Australia are:

Working with horses to promote the wellbeing of Aboriginal youth: An experiential learning approach for the Kimberley – $2,516,797.40

First-in-human evaluation of a novel immunobiotic to prevent respiratory infection, $1,180,080.10