First published in the The West Australian 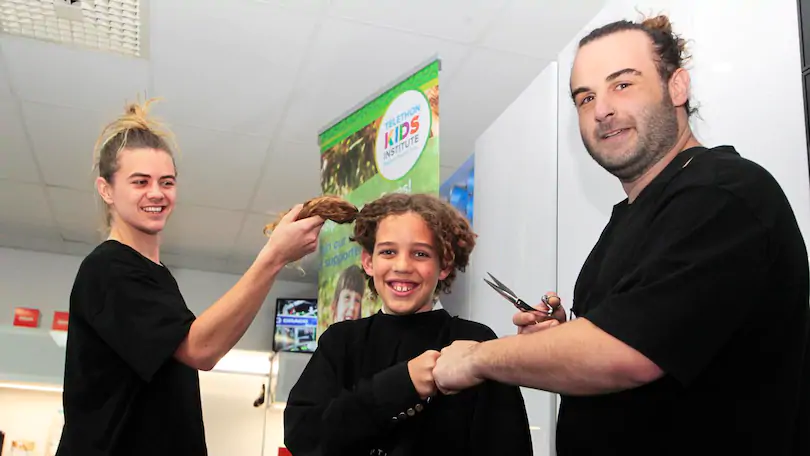 Hairdressers Taylor Pierre and Cody Trimboli can scarcely believe Beau's bravery, shaving off more than five years worth of growth all in the name of cancer. Credit: South Western Times, Callum Hunter

A brave young man stepped up to the plate on Friday to do his part in the battle against cancer.

Beau Jones, 9, had been growing his hair for more than five years before it was shaved off in a matter of minutes on Friday afternoon.

“People in our family have had it before and I’m pretty annoyed about it.”

Beau had good reason to take a stand after two of his cousins were diagnosed with leukaemia and a brain tumour at the ages of nine and two years old respectively.

These bombshells being dropped so close to home were what inspired him to take a stand, a stand that had raised more than $4600 for the Telethon Kids Institute as of Friday afternoon.

Dozens of family and friends turned out for the event and as shaving hour approached, the nerves started to set in for Beau.

“I’m a little nervous but also excited,” he said.

Before long the locks were gone and cheers erupted from the gathered onlookers, but none were louder than Beau’s mum Joanne’s.

“I’m so extremely proud,” she said.

“We’ve told him for years that when he was ready to shave it off, let us know, then one day he did.

“When Seth was diagnosed and then Spencer, it was a case of ‘nup, we’re doing it for a good cause’.”

At the start of the fundraising, the family said they had only hoped to raise $1000 but that total was achieved in next to no time, so they decided to up the ante and go for $5000.

Want to raise money for Telethon Kids like Beau? Find out more about fundraising.