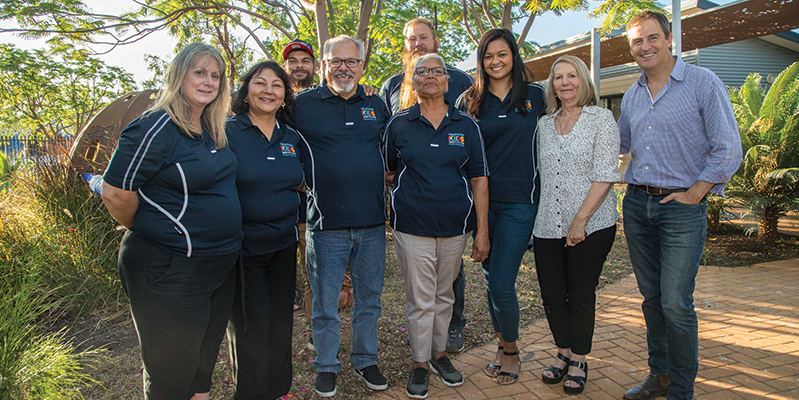 A $5 million commitment from BHP has allowed Telethon Kids researchers and Aboriginal communities to join hand-in-hand in a bid to make Fetal Alcohol Spectrum Disorder history in the Pilbara.

Local leader and CEO of Wirraka Maya Health Service, June Councillor, has spent years working to highlight suspected high rates of Fetal Alcohol Spectrum Disorder (FASD) among Aboriginal children and youth in some Pilbara communities. In response, and at the request of BHP, in 2014 the Telethon Kids Institute with Wirraka Maya established a FASD research program in Port Hedland, Yandeyarra and Warralong.

The Warajanga Marnti Warranja – Together We Walk on Country program was based on successful strategies employed in the Kimberley and elsewhere in the world, but adapted for the Port Hedland context.

The program, including its name, was carefully developed after close consultation with the local Community Reference Group and the Hedland FASD Network, representing more than 30 health, education and justice services.

“Alcohol is a sensitive topic. If you just called it Hedland FASD or something like that, people might be embarrassed and reluctant to engage. The name, and the use of the Nyangumarta language, reflects the collaborative nature of the program.”

Glenn Pearson, Head of the Aboriginal Health Research Focus Area at Telethon Kids, said the $5 million commitment from BHP had enabled the Institute to develop a foundation to work with Aboriginal families and children in the Pilbara both on research and other issues around FASD, including prevention.

“The Institute has developed relationships with community that involve much more than just scheduling research,” Mr Pearson said. “It’s really important that these communities can set the conditions on which they are involved in research that affects them.

“It’s also provided the opportunity to build local capacity and provide research training and career development for Aboriginal people to work in their own communities.”

Community researcher Margaret ‘Sissy’ Ramirez said she had learnt the importance of having good data to help Aboriginal people to tell their stories.

“It’s a really important way for people to understand your message,” she said.

Fellow community researcher Elaine Clifton said she saw Telethon Kids as the face of FASD in the Pilbara, and working with researchers had taught her to be curious about why a particular behaviour was happening.

“Through research and education people are listening and yarning about it,” she said. “As long as we walk together, we know we are supported.”

Since embarking on the program the research team has collected more than 1,000 surveys to ascertain community awareness of FASD; trialled a school-based therapy program that reached more than 100 primary school children; and conducted FASD diagnostic clinics to increase the number of local children receiving a FASD diagnosis.

As a result, the team has helped make FASD a front-of-mind issue for Pilbara health and
medical services, schools, and non-government organisations – leading to increased diagnoses of children with FASD, the development of a clinical referral mechanism, and research into potential therapeutic interventions.

“Our work, including strong engagement with the Port Hedland community and local capacity building of Aboriginal co-researchers, has proven successful in maintaining levels of awareness about the risks of drinking during pregnancy at around 94 per cent,” Mr Pearson said.

An additional $5.4 million worth of funding has also been secured to translate FASD prevention research in other sites.

Chief investigator on the program, Dr James Fitzpatrick, said BHP’s commitment – together with the leadership of Aboriginal community members and organisations had created a clear path forward to making FASD history in the Pilbara.

“Through ‘walking together’, the community as a whole is focused and mobilised in tackling FASD and giving their children the best start to life. This is the power of translational research. FASD is preventable and we all want every child to have the best possible start in life,” Dr Fitzpatrick said.

Mr Pearson said the Institute was extremely grateful to BHP for its partnership and funding, which would help to set Pilbara children at risk of FASD on a more positive trajectory.

“This program will increase the opportunity for children not even born yet to have a quality of life consistent with other children,” Mr Pearson said.

“It’s imperative that we continue to work together to create a brighter future for all children and a community that understands, welcomes and supports them.”

The Pilbara FASD Project was supported by BHP.