Smooth sailing for Drina thanks to burden-breaking technology 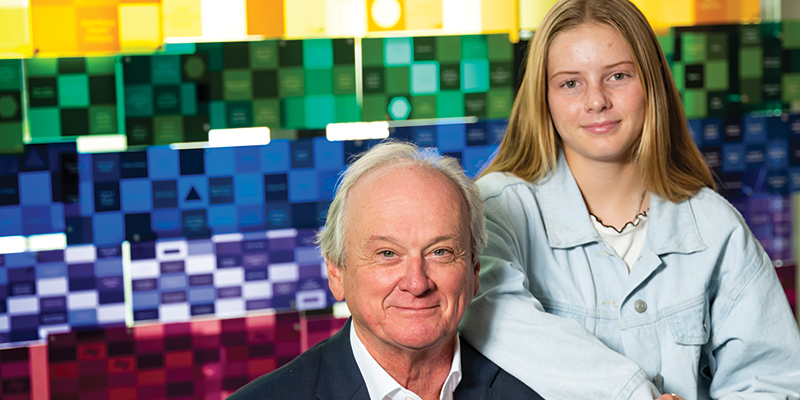 Soon-to-be teenager Drina Bucktin loves hanging out with her friends and making the most of her new-found independence. This freedom hasn’t always been a given, however. Drina has type 1 diabetes, a chronic disease which means every mouthful of food — or exercise, sleeping, stress or puberty — can affect her blood glucose levels.

Thankfully, recent diabetes technology is helping the 12-year-old keep on top of her condition and be independent, while significantly easing the disease burden on her family.

A few years ago, Drina’s family took part in the Children’s Diabetes Centre’s ‘CGM and Everyday Diabetes Care’ trial – a study which explored the effect of continuous glucose monitoring (CGM) with remote monitoring on psychosocial outcomes in parents of children with type 1.

The system works by transmitting blood glucose readings every five minutes via Bluetooth to a mobile phone or smartwatch. It can also share readings with other devices and send push notification alerts of highs (hyperglycaemia) and lows (hypoglycaemia).

The study, published in the prestigious Diabetes Care journal, found the technology reduced parents’ stress and anxiety and improved their sleep and family functioning.

“Life is a lot less stressful on everyone and I have a lot more freedom since using the CGM with remote monitoring – I love it,” Drina said.

Drina’s mum, Heidi, said the technology had been life-changing for the family.

“Since I can share the management of her blood glucose levels (BGL) with the school nurse and coaches, it (CGM) has allowed me to pursue my professional career as I’m not hanging around the school or constantly on the phone providing advice or ready to drop everything to attend to Drina,” Heidi said.

“It’s been great for my sanity, my own professional development and contribution to the family income.”

Heidi said Drina had taken on more of her own disease management knowing she had support from those around her, while her ‘nagging’ mum could monitor from a distance.

The technology had particularly made an impact on Drina’s competitive sailing, which included representing Australia in a competition in New Zealand recently.

“We can monitor Drina’s BGL during a race without the fear of her crashing dangerously low, and without dosing her with sugar to make sure she doesn’t go low,” Heidi said.

“We can also share the Dexcom (CGM with remote monitoring) with her coach so we don’t have to be on the water every time she trains or races.

“We actually get a small part of our life and sanity back while Drina gets to join in with the other kids without mum or dad hanging around all the time.”

“Parents of a child with type 1 diabetes live in constant fear that they will put their child to bed at night, but they won’t wake up in the morning because their blood glucose levels have dropped to dangerously low levels overnight,” Professor Jones said.

“Some diabetes technologies have the potential to make life more stressful so we wanted to find out if this technology might improve glucose levels and improve quality of life.

“This study has demonstrated unequivocally that the use of CGM with remote monitoring can improve the quality of life of families living with type 1 diabetes — parents sleep better, family stress is reduced, and anxiety is reduced.”

Professor Jones said it was important to note that at the time of the study, CGM was not  publicly funded in Australia and usage was low (CGM became fully subsidised for children in April 2017).

“While many families who participated in the study could not have afforded to pay for it (approximately $5,000 annually), almost all of the participants decided to continue once the funding came through — this is telling,” he said.

“Before this subsidy, only 5 per cent of our patients used CGM but this has risen to 70 per cent.

“We’re putting our patients on CGM from diagnosis now — we are about improving outcomes and reducing the disease burden and this technology is doing that.”

“We are a world-recognised centre for this type of research so what happens here will be published and disseminated internationally and it will add to the evidence for CGM use,” he said.

He also predicted the technology would take over from finger pricking – something families have until now had to perform on children six to eight times a day.

This study was performed at the Children’s Diabetes Centre, a JDRF/National Health and Medical Research Council-funded Centre of Research Excellence based at the Telethon Kids Institute.