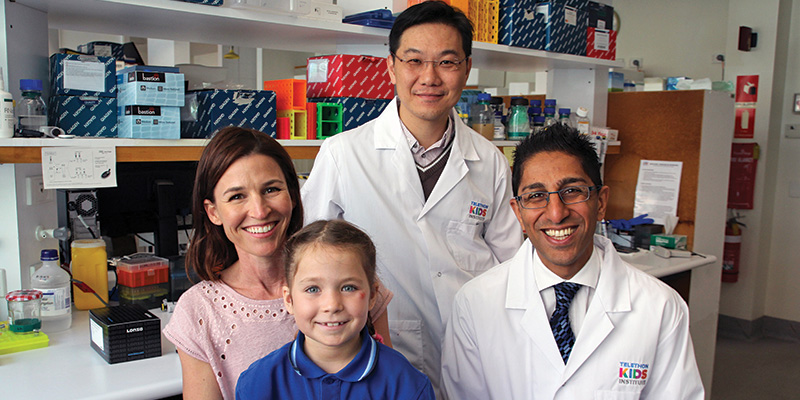 When three-year-old Flo Parker injured her hip on a camping trip five years ago, her parents Marny and Daniel thought it would be nothing more than a common childhood injury. But when she reverted to crawling due to the pain she was in, they knew something was seriously wrong.

Scans later revealed the unimaginable: their daughter had a rare form of leukaemia growing in her bone marrow. After years of harsh chemotherapy Flo is now in remission, but the treatment that saved her may have life-long lasting effects.

“In the long term, bone density is a possible issue we may be looking at,” Marny said. “My understanding is that she could be looking at the early onset of osteoporosis, in her early 30s.”

Now, in findings which offer hope to kids like Flo, Telethon Kids Institute researchers have discovered a drug that can not only prevent bone density loss, but has the potential to slow leukaemia progression. The world- first discovery has prompted a change in thinking around the best way to target treatment.

Telethon Kids Cancer Centre researcher Dr Laurence Cheung, who led the team which made the discovery, said the findings, although pre-clinical, were promising and suggested that targeting the microenvironment around leukaemia cells could not only help fight leukaemia, but simultaneously provide relief for one of its most common and painful side-effects – bone loss.

“Acute lymphoblastic leukaemia is the most common cancer among children and remains a common cause of cancer-related death before 20 years of age,” Dr Cheung said.

“When we created a pre-clinical model replicating this leukaemia sub-type, we witnessed substantial bone loss during development of the cancer. We wanted to discover what was causing the bone loss, which the existing literature suggests is experienced by more than a third of children diagnosed with acute lymphoblastic leukaemia.

“We managed to identify a signal produced by the leukaemia cells which instructed cells in the surrounding microenvironment to eat away at the bone. Then we thought, what if we stop these cells from eating the bone away – will this have an impact on the development of leukaemia?”

The researchers used a commercially available drug called zoledronic acid – already known to be safe for children and used to treat brittle bones – to target the bone eating cells in the microenvironment around the leukaemia cells.

“Importantly, we found that this not only compensated for leukaemia-dependent bone fragility, but also reduced leukaemia progression,” Dr Cheung said.

He said the discovery that cells surrounding the leukaemia cells could contribute to failure or success showed how important it was to look at the whole picture. Although similar thinking had previously been applied to cancer in adults, the finding offered an exciting new treatment angle for children.

“To date, the main strategy for cancer therapy in children has focused on targeting malignant cells with chemotherapy, which is toxic for leukaemia cells but also toxic to the patient,” Dr Cheung said.

“This new research could provide us with a powerful adjuvant therapy. It won’t replace chemotherapy, but we propose that using chemotherapy and treating the microenvironment at the same time will have more benefit than just chemotherapy on its own.

“Although there’s quite a way to go yet, it’s exciting to think about the potential dual benefit this offers, and the paradigm shift it represents for children’s leukaemia.”

This research was carried out in collaboration with Curtin University, The University of Western Australia, the Harry Perkins Institute of Medical Research, St. Jude Children’s Research Hospital, USA, and Perth Children’s Hospital.

This research was supported by the Children’s Leukaemia and Cancer Research Foundation and Cancer Council Western Australia.