Pioneering research could be key to keeping cancer in check 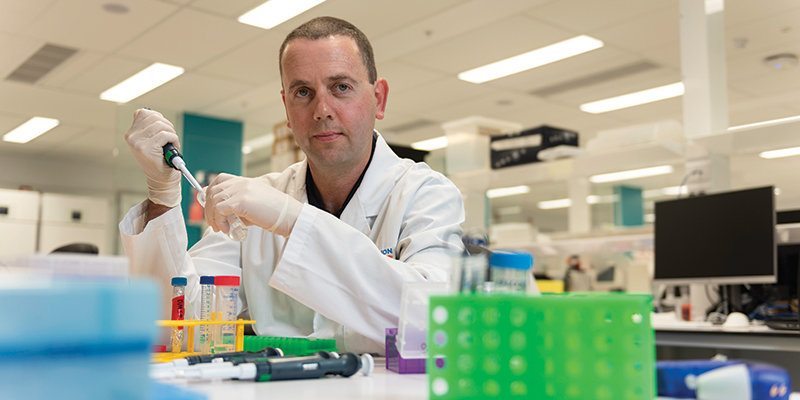 Cancer research is being reimagined after a collaboration between the Telethon Kids Institute, the Peter Doherty Institute for Infection and Immunity, and international researchers unlocked game-changing new knowledge about how the immune system puts melanomas to sleep.

The team behind the pioneering research – led at Telethon Kids by Dr Jason Waithman, Head of the Cancer Immunotherapy Group – believe the breakthrough has the potential to effectively cure cancer, by rendering cancer cells permanently dormant.

The researchers set out to investigate the role of a particular immune cell – tissue-resident T (TRM) – in controlling the growth of melanoma tumours.

“Our initial research found that TRM cells can make cancer cells dormant, or put them to sleep, through a process called cancer immune-surveillance,” Dr Waithman said.

Using a mouse model developed by Dr Waithman, a team of researchers – led by Thomas Gebhardt at the Peter Doherty Institute at the University of Melbourne – was able to track both the TRM and cancer cells and observe them in action.

This allowed them to not only analyse up-close the relationship between the immune system and cancer, but to capture stunning real-time video of TRM cells keeping melanoma cells in check.

Various colours used to clearly identify the different cells, along with firefly genes that helped to light the cancer cells up, made these tiny tumours visible to the researchers.

“This meant we could track immunity in this setting in exquisite detail,” Dr Waithman said.

“We’ve known for a long time that this suppression process could happen, but found it very difficult to study in the past.”

Dr Waithman said the research and associated model represented a major step forwards in the control of cancer.

“There are three stages of cancer control, referred to as the ‘three Es’,” he said. “Cancer can be eliminated, the cancer cells can escape and cause tumours, or a state of equilibrium can be reached. These can all be mediated by the immune system.”

This last stage — reaching equilibrium — is driving the next part of the research.

“We’ve discovered that TRM cells act like security guards, surrounding the tumour and preventing it from escaping,” Dr Waithman said.

“Through the research we watched this unique cell population surveying the cancer and keeping it asleep. When we depleted that specific cell type, the tumours would then re-emerge.”

“Now we want to know how tumour cells escape and if there’s a way of preventing this from happening. By looking more closely at how equilibrium is maintained, we can develop new strategies that make this process occur more frequently.”

Dr  Waithman said the researchers hoped the findings would lead to treatments to potentially convert aggressive cancers into a chronic, manageable condition.

“This really has the potential to put cancer to sleep forever, essentially providing a cure,” Dr Waithman said.

The ground-breaking research demonstrating how the immune systems keeps melanoma in check was made possible thanks to a novel cancer transplant model developed by Dr Waithman.

“A transplantable model is ideal as it gives us full flexibility to modify the cancer cells prior to transplantation,” Dr Waithman said. “That meant we could include multiple tags on the cancer cells, making them express different fluorescent colours and glow like a firefly. This in turn allowed us to track the cancer progression and observe the disease in action.”

“This was a lightbulb moment that prompted us to then ask challenging questions about how the tumours were able to remain dormant – a process caused by immune mediated equilibrium. “This led us to identify the TRM cells – leading to the exciting research which has just been published in Nature.”