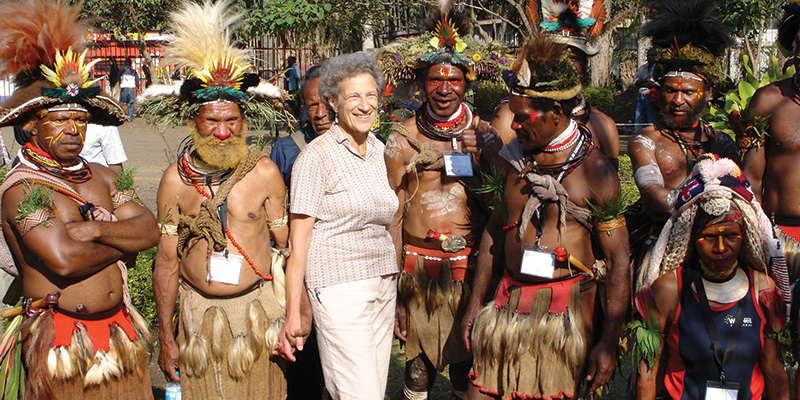 Children living in Papua New Guinea have good reason to call Clinical Associate Professor Deborah Lehmann ‘Mama Deb’ – her dedication to preventing pneumonia can be credited with saving the lives of many thousands of babies.

The highly-respected researcher spent 17 years living in Papua New Guinea (PNG), following her passion to reduce the burden of childhood infectious diseases. Now, an award named in her honour will allow others to follow in her footsteps. 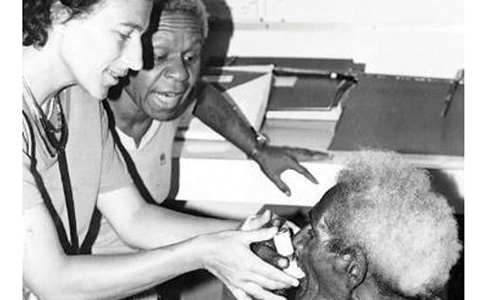 Funded by the Wesfarmers Centre of Vaccines and Infectious Diseases, the annual Deborah Lehmann Research Award will provide training and development for early career researchers and students in the Western Pacific Region, ensuring her groundwork can be built upon for many years to come.

Professor Lehmann’s research in the region began in the Southern Highlands of PNG in August 1981, after she accepted a position as Director of the Tari Research Unit (TRU).

“I remember walking into the TRU’s office – a two-room hut where I met the village reporters, some wearing their traditional Huli wigs and loin cloths,” Professor Lehmann said. “There weren’t any computers at that point and I was perplexed by the working hours being precisely 7:45 to 4:06, especially when no one had watches!

“I signed up for two years and ended up staying for 17 – I met my partner Michael Alpers at the Papua New Guinea Institute of Medical Research (PNG IMR) in Goroka and have continued to work closely with the Institute for over 37 years now – more than half my life.”

Professor Lehmann’s work has been primarily focused on the prevention of pneumonia – the major killer of young children in PNG and other third world countries.

After becoming Director of Pneumonia Research at PNG IMR, she spent a  number of years investigating which pneumococcal vaccines could provide the best possible protection for babies, and the optimum time to provide them.

“Even now, infant mortality caused by pneumonia is 10 times higher in PNG than in Australia, and back then it was far worse,” Professor Lehmann said.

“We really needed to try and address this dire situation in any way we could, whether it be through vaccination, nutrition or appropriate diagnosis and treatment.

“We also documented that even if you lived one hours’ distance from a hospital, a child’s risk of dying from pneumonia was much higher, so access to health care was vital.”

Although Professor Lehmann made significant research strides while in PNG, things were not always plain sailing, and she has many quirky memories of the years she spent there.

“During my time in Tari, all of our data had to be transported by road to another town for data entry into a mini computer that took up the space of a whole room,” she said.

“Miraculously no data were lost on the way, however some data from a maternal nutrition study were in a suitcase stolen from my house – and were later seen decorating a Huli’s wig!” Professor Lehmann said.

“One day we were working in our office and a big tree was being cut down outside – someone tried to provide some advice but was told ‘Don’t tell us what to do, we know how to cut down trees’. The next minute the tree came crashing down on our roof – luckily no one was injured.”

After nearly two decades in PNG, Professor Lehmann moved to Australia in 1998 and joined Telethon Kids, where she has used the skills and research expertise she acquired in PNG to establish programs in acute respiratory infections, otitis media (middle ear infections), and Aboriginal health.

She has led ground-breaking work including the Swimming Pool Study, which established the health benefits of introducing swimming pools into remote Western Australian Aboriginal communities; and the Kalgoorlie Otitis Media Research Project.

Professor Lehmann continues to collaborate with researchers at PNG IMR and in Australia on significant ongoing research projects, and has encouraged others at Telethon Kids – many of whom she has mentored – to collaborate on projects in the region, including Dr Peter Richmond, Dr Christopher Blyth, Dr Lea-Ann  Kirkham, Dr Anita van den Biggelaar, and Dr Ingrid Laing.

Renowned as a generous and compassionate mentor devoted to training and nurturing the next generation, Professor Lehmann has had a profound impact on the careers of countless younger researchers, including 10 Aboriginal researchers whom she mentored as part of an NHMRC Indigenous Capacity Building Grant.

Combined with her considerable research achievements, that contribution as a mentor means Professor Lehmann’s influence will be felt at the Institute – and most importantly by children and their families – long after her impending retirement.

The impact of Professor Lehmann’s work in PNG over the past 30 years is impossible to measure, according to Dr Tom Snelling, former Director of the Wesfarmers Centre of Vaccines and Infectious Diseases.

“We know pneumonia is responsible for more than one million childhood deaths around the world each year, so Professor Lehmann’s work preventing pneumonia ensures many thousands of kids make it through their vulnerable early years,” Dr Snelling said.

“We are very proud to announce the Deborah Lehmann Research Award in recognition of Professor Lehmann’s dedicated research in PNG, and we look forward to seeing young researchers continuing her legacy by providing better prevention and treatment solutions for children in this region.”

The inaugural recipient of the $30,000 annual award, Celestine Aho, was formally announced in March 2019. Ms Aho will investigate the true burden of otitis media and the cause of these infections among children living in the Eastern Highlands of PNG.

Ms Aho’s passion for research around otitis media stems from her little brother’s hearing loss and learning difficulties after recurring ear infections as a baby, and she is now determined to highlight the importance of ear health.

“My family knew little about the effects of otitis media on hearing as it was considered a normal part of growing up, and we didn’t have education around ear health issues or awareness of audiology support services,” Ms Aho said.

“As part of my research, I hope to bring emphasis on the awareness of otitis media in the community and in primary health care.”