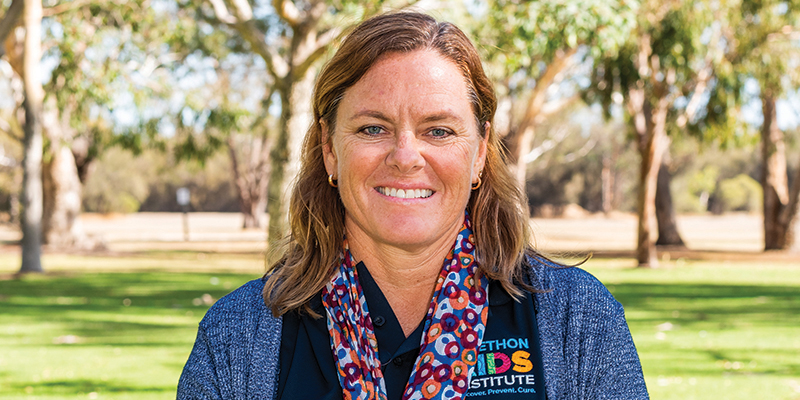 While her initial work at the Telethon Kids Institute was around bullying, Professor Juli Coffin’s most recent research focuses on the healing power of horses – also known as equine-assisted learning.

“You or I could be the best psychologist in the world but we can’t get the same result someone interacting with a 600kg horse can get,” Professor Coffin said.

Equine-assisted learning is an innovative form of experiential learning, based on the idea that horses can help people to express themselves more openly and honestly.
Participants are guided to interact with horses in different ways, enabling them to develop new insights and skills that will help them relate better in relationships and cope with life’s challenges.

Some took part to develop leadership skills, and others to help overcome behavioural issues that often resulted in school suspension and relationship issues.

“The biggest focus is around healing and trauma. The leadership component is really important, though, because we didn’t want the program stigmatised in the community as being for people who were mentally unwell,” Professor Coffin said.

She said if there was trauma at home, some kids found it difficult to express that or even know if it was normal – often resulting in behavioural issues. Teachers and caregivers could mistake this for attention-seeking, and children were often misdiagnosed and medicated to manage their behaviour.

“What we do is not about unpacking the issues,” Professor Coffin said. “It’s a resourcing program about providing our most vulnerable young people with the tools around healthy relationships and self.

“The one thing it does do effectively, that’s hard to do in a classroom, is self- regulate emotions like anger, sadness, fear and happiness. It starts to set up much better patterns around the types of issues Aboriginal youth are having in their learning environment.

“My thinking is I’m sure there’s a better way than setting up another cycle of drug addiction – it’s an alternative way to provide calmness and regulate emotions.”