Five Fitzroy Crossing women have been awarded nationally-recognised qualifications after working with the Telethon Kids Institute’s Alcohol and Pregnancy & FASD Research Team, thanks to funding from 100 Women.

The women completed their Certificate II in Community Services at Northern Regional TAFE last year while working with Telethon Kids researchers to carry out the Alert Program® Study.

Project coordinator Bree Wagner said the relationship had created valuable outcomes for both Telethon Kids and the wider Aboriginal communities where the women live.

“We call them our two-way partners,” Ms Wagner said. “The research would be almost impossible to do without their support."

“They helped us form and maintain positive relationships with community members, ensuring we’re working in a culturally appropriate way and following cultural protocols.”

The women learnt a wide range of skills, including health and safety, working with a diverse range of people, communication skills, preparing a resume, and first aid. 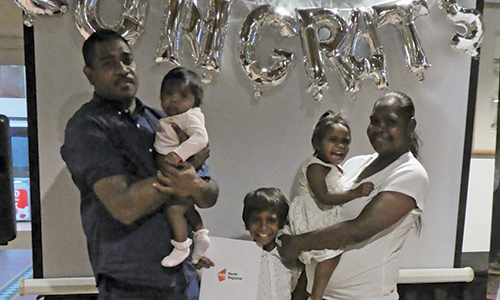 Ms Wagner said the women had been integral in providing cultural support and translation services, as well as helping parents involved in the Alert study fill out questionnaires. They had also helped with student testing in Fitzroy Valley schools, and were involved in sharing feedback with the families.

Ms Wagner said the TAFE certificate the women had earned would enable them to build further on the skills and experience they had acquired.

“The skills these women gained have allowed them to branch into roles within the community space, giving them the experience to find the job they want,” Ms Wagner said.

“It’s given them the confidence to have a greater voice in their community and set a positive example for their children.”

Since graduating in August 2018, several of the women have secured employment.

One works as a family support worker through the local women’s resource centre, another has joined the Remote School Attendance Strategy team, and a third woman has recently secured employment as a mental health worker.

Asked why they chose to pursue the certificate, all five women said they wanted to help people by strengthening the health of children in their communities, so they could get an education and grow up to get a good job.

Results of the project will be available later this year.

The Alert Program® Study was funded by a National Health and Medical Research Council Project Grant and 100 Women.