Giving wings to a generation of Indigenous leaders 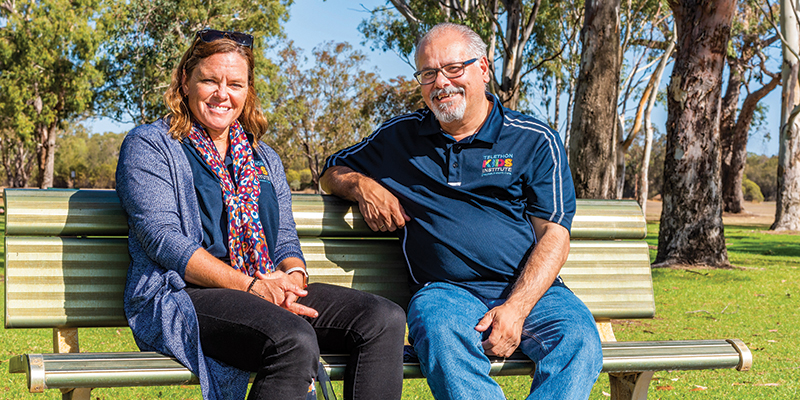 In 2005, the Telethon Kids Institute won a National Health & Medical Research Council Indigenous Capacity Building Grant that drew together a team of 10 dedicated investigators – all Aboriginal researchers working to improve the health of people in their communities. Since completing the grant in 2009, many have emerged as national leaders in their fields.

The grant, Not Just Scholars but Leaders: Learning Circles in Indigenous Health Research, was the first of its kind aimed at developing a critical mass of Indigenous researchers who could undertake high quality research into health priorities determined by Indigenous people.

The five-year project – developed and led by Associate Professor Deborah Lehmann – saw Indigenous researchers linked up with centres of excellence in research in Australia and internationally, to pursue research across a spectrum of issues including mental health, self-esteem, gender, substance abuse, bullying, juvenile justice, primary health care, and human rights.

Professor Juli Coffin, who recently returned to Telethon Kids, was one of the 10 original Capacity Building Grant investigators. The only one living in regional Australia at the time, she said the opportunity it had offered her had been nothing short of amazing.

“It was the mentoring and support I got; people always said I had a different way of looking at things and held some innovative ideas, but I never really got to put them into practice,” Professor Coffin said.

“So for me, that was one of the first times I could see a need and answer it in a way I knew the community would respond to, without being told how I had to do it.”

Glenn Pearson, Head of the Institute’s Aboriginal Health Research Focus Area – who was invited into the group to undertake his own doctoral project – said for many of the investigators, the grant and the work it facilitated had been their introduction into the scientific world, providing a safe place to explore their fields.

“It brought us into a space to do our research helped by senior researchers like Deb Lehmann who were the arms around us, put there to both hold us and put the right pressure on us,” Mr Pearson said.

“They supported us when we came together and when we went back into our research worlds, and that has formed the foundation for all our work since.”

Associate Professor Lehmann mentored the original group from its inception, helping the participants achieve their goals and become independent researchers.

She said it had been a mammoth task – managing a big team of investigators spread across institutions around the country, organising meetings and workshops, and overseeing the diverse needs of each member of the group. However, her prediction at the time – that many were poised for great careers – was spot-on.

She was delighted many had done so ‘fantastically well’, applauding them as leaders in Aboriginal health research and for being committed to translating that research into practice.

“Leading that grant was the hardest thing I’ve done,” she said. “I value the knowledge and friendship of all the investigators and am delighted that it progressed; it was just a question of mentoring and helping them.

“I’m pleased we supported them; the outcome has been really good and they really should be the people working here and telling us how to do Aboriginal health research.”

In addition to their research, those who took part in the grant hosted a National Roundtable on Research on Racism towards Indigenous Australians, which led to a united Declaration and a submission to the Human Rights and Equal Opportunity Commission.

The grant produced five completed PhDs, with most who took part now regarded as leaders in their respective fields of research. Many have retained links to Telethon Kids – including Professor Coffin who, although based in the Kimberley region, recently re-joined the Institute after holding distinguished positions including Head of Campus and Executive Director, Notre Dame Broome.

“Living in the Kimberley has its challenges when it comes to professional connectivity, but with the right space to think and create in a culturally responsive way, I hope to see Aboriginal ways of working in the research space as the norm instead of the exception,” Professor Coffin said.

NHMRC Indigenous capacity building grant - Where are they now ?

Ted was the Director of the Derbarl Yerrigan Aboriginal Health Service in Perth for 16 years and is a former Associate Professor at Telethon Kids. He is also a former co-team leader of the Aboriginal Australian Research Program at Curtin University’s National Drug Research Institute. In 2014 he was made an Officer of the Order of Australia for distinguished service to the Indigenous community in areas of public health and welfare, among other achievements.

Cheryl is a leading researcher in the School of Education at Curtin University, focusing on Aboriginal education and wellbeing. She is founder of the Pindi Pindi Pty Ltd Centre for Research Excellence in Aboriginal Wellbeing and was named WA Local Hero 2019 as part of the Australian of the Year Awards.

A Research Fellow in the School of Occupational Therapy, Social Work and Speech Pathology at Curtin University, Michael is currently lead investigator on the Looking Forward, Moving Forward Project; funded by the NHMRC until 2021. He was lead investigator on the Looking Forward Project (2011 – 2015) that developed the Minditj Kaart-Moorditj Kaart Framework. Co-designed by Nyoongar Elders and service providers, it is a culturally-safe system change intervention that has been implemented in mental health and drug and alcohol services in the Perth area.

One of the first Aboriginal doctors in Australia, Ngiare is a founding member and was Foundation CEO of the Australian Indigenous Doctors’ Association, and is a founding member of the Pacific Region Indigenous Doctors’ Congress. In 2015 she established not-for-profit organisation Ngaoara, focused on Aboriginal child and adolescent wellbeing. She is currently a Commissioner with the National Mental Health Commission.

Formerly of Curtin University, Dawn is Director of the Centre for Aboriginal Medical and Dental Health at UWA. A social worker with extensive experience in Aboriginal child protection, community and family violence, she is chief investigator on several NHMRC grants and is highly regarded for her expertise.

A registered nurse and former Aboriginal health researcher at Telethon Kids focused on maternal, infant and child health, Dan is currently Director of the Centre for Improving Health Services for Aboriginal and Torres Strait Islander Children and Families (ISAC), based at UWA.

Janet, whose research focuses on FASD and other alcohol and substance abuse-related harm, now leads the Collaboration for Alcohol Related Developmental Disorders within the Perinatal Research Group at the University of Queensland Centre for Clinical Research. In 2008, Janet was made a Member of the Order of Australia (AM) for service to the community through health services for Indigenous women and children, and research into the effects of FASD.

Jocelyn is an Aboriginal epidemiologist and Senior Research Fellow at The University of Western Australia, specialising in qualitative and data linkage methods. She completed her PhD in 2018.

Helen, a child and adolescent psychiatrist, left the grant project partway through but went on to hold significant national roles including as a Commissioner with the Royal Commission into the Institutional Responses to Child Sexual Abuse and a Commissioner with the National Mental Health Commission. Currently a UWA Professor, she was recently appointed the Australian Football League’s first Indigenous Commissioner.