Held every two years, the Australasian FASD Conference is a significant and unifying event for those in the Fetal Alcohol Spectrum Disorder sector. The latest conference, held in Perth last November, saw researchers, professionals and families sharing insights and galvanising momentum for future collective action.

Hosted by the multi-site FASD Research Australia Centre for Research Excellence (CRE), which has its Perth node at the Telethon Kids Institute, the 2nd Australasian FASD Conference 2018 was attended by more than 350 delegates, including international researchers, health, justice and education sector professionals, and families and carers of people with FASD.

Co-Director of the CRE and leader of its Perth arm, Professor Carol Bower, welcomed the new action plan, saying the funding would help continue the national progress made in addressing FASD – progress which could only be made by giving all stakeholders a voice.

She said a key aim of the CRE was to involve consumers, parents and carers of people with FASD in guiding its work.

"The highlight for me was seeing how much people enjoyed seeing everybody involved with FASD getting together to think about how we progress the research."

The conference also firmed connections between clinicians and researchers around Australia and with international researchers, opening opportunities for strengthened collaboration. One included a Memorandum of Understanding with Canadian FASD researchers to work together on prevention, diagnosis and management of FASD.

Professor Bower said the conference helped researchers to refine the focus of future research beyond the current CRE.

“There is a lot to do in FASD, but it is clear that FASD is just part of a bigger picture of neurodevelopment in childhood – for example, we have a project looking at trans-diagnostic approaches to early development,” she said.

“Often before you can make a definitive diagnosis such as FASD, autism or ADHD, there are hints that progress might not be going right at that stage. That’s an important development of our FASD work and other research at the Telethon Kids Institute.”

A workshop held the day before the conference saw lawyers, police, child protection staff and consumers join researchers to hear valuable insights which will help guide management of people with FASD in the justice system. Those insights were made possible thanks to ground-breaking work carried out by Professor Bower and her team at Telethon Kids, which revealed that more than a third of young people in the Banksia Hill Youth Detention Centre had FASD, and nine in 10 had severe neurodevelopmental impairment.

“In our Banksia Hill study 36 per cent of young people had FASD, but we also found that 89 per cent had at least one severe developmental impairment, so in justice we believe we should be focusing generally on neurodevelopment, not just on FASD,” Professor Bower said.

She said those who had attended the workshop had been highly engaged.

“We had a really good group of people and a lot of energy that we hope we can build on to guide management and how justice services are structured,” Professor Bower said. 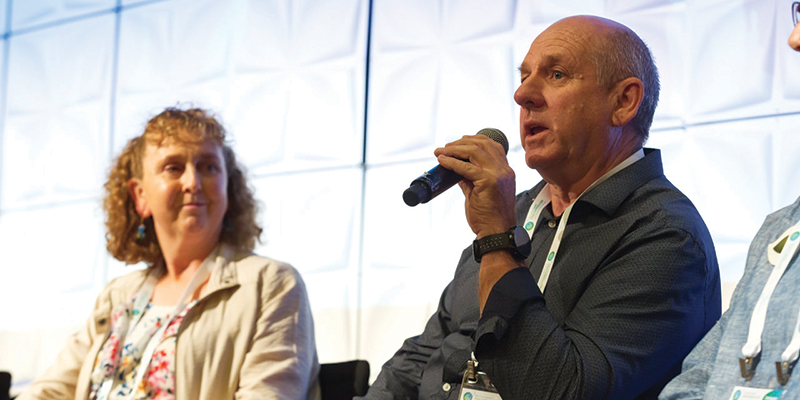 For Neil Reynolds, foster dad to siblings aged seven and 10 years, who both have FASD, the 2nd Australasian FASD Conference was full of opportunities that only reinforced his positive outlook.

Well researched and with seven years’ experience parenting children with the condition, he and his wife know that a consistent, appropriate approach helps each child to maximise their achievements.

“That’s the message we tried to convey through the conference: that there is hope for these kids,” said Neil.

“There’s a big difference that can be made – you get massive rewards from them and they can achieve amazing things. You just need guidance and support because they are not like anybody else in the community. You’ve just got to do it a little bit differently and if you stick at it, you get great rewards,” he said.

Testament to this approach, Neil’s foster daughter is now completing Year 5, is able to read and enjoys school. She is a ‘gun’ at computer games and has become highly engaged in maths study, since it has been delivered via an iPad.

“She is certainly achieving far greater than the expectation was at the beginning of her schooling,”he said.

“Socially she is well-liked and accepted, and she is positive about the learning process, even though not achieving as highly as the other kids."

“But unlike a mainstream child where it just happens, with these kids you’ve got to just keep pushing and encouraging until you get what you want,” he said.

The conference enabled Neil to share his positive message with other parents, dispelling what he says is general negativity about the outlook for these kids. Added to that, listening to the successes researchers and clinicians were having was highly affirming for all.

“It’s great for parents to be able to sit down and hear of clinicians having success with some of their clients and some of the projects they have put in place,” he said.

“There are researchers finding things out about dealing with behaviours and it’s good they can pass this on to the parents, so they can put it into place.

“It’s also good to speak to people who have done those things and had some success – the effort in consistently following these guidelines is certainly worthwhile.”

Neil said parents and carers felt valued in being able to share their insights and perspectives with researchers and clinicians.

“There are so many different aspects of FASD,” he said.

“It was a fantastic opportunity. Often you have clinicians together, researchers together or parents and carers together, but it is rare you get them all in the one place – and so many of them, with so much passion and knowledge about the subject.”