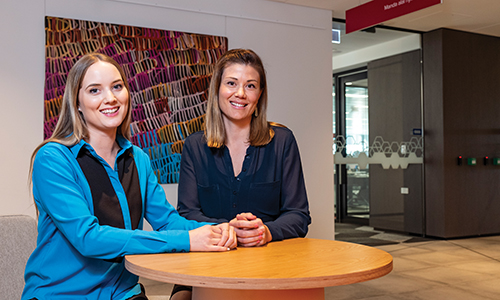 Eighteen months on from the publication of its findings in BMJ Open, the game-changing Banksia Hill Project is continuing to reshape the way authorities manage and support vulnerable young people within the justice system.

The two-year study, which was the first in Australia to assess and diagnose young people in a youth custodial setting for Fetal Alcohol Spectrum Disorder (FASD), revealed that more than one third of young highest known prevalence in a justice setting worldwide.

The team, led by Professor Carol Bower, also found 89 per cent of the young people examined had at least one form of severe neurodevelopmental impairment – providing evidence that youth with neurodisability are grossly over-represented in youth detention in WA.

The results are still rippling through government departments, police, custodial authorities, and the Children’s Court, and have led not only to changes in policy and practice, but increased community understanding of FASD and widespread interest in Australia and overseas

“The delivery of training resources, pioneered by Hayley Passmore, to more than 100 Banksia Hill custodial staff means they are now better equipped to be able to recognise and work effectively with young people with neurodevelopmental impairment,” Professor Bower said.

“Here in WA the findings, and the continuing advocacy and analysis by team members, have changed the way the justice workforce engages with these young people.”

“We’re also seeing moves to improve the way police and the Children’s Court interact with young people with a communication disorder or a different language who come into the justice system – another important finding.”

The training resources developed, delivered and evaluated by Ms Passmore were a key outcome of the Banksia Hill Project, and are now in hot demand.

The Department of Justice has commissioned further paid training sessions for staff including newly recruited youth custodial officers and community youth justice officers, and other sectors, including police, child protection and education, are also keen to receive the training. In addition, Ms Passmore has received requests to access the resources from researchers, service providers and agencies worldwide.

“These requests are increasing rapidly given the global interest in FASD and justice-involved youth. I’m now seeking funding to evaluate the effectiveness of the training with other workforces, and to develop a ‘train the trainer’ model to ensure the training remains sustainable,” said Ms Passmore

The Children’s Court is also changing the way it responds to young people coming before it, thanks to the study’s findings. Judicial officers have relied on assessment reports prepared by the team to better understand mitigating factors for sentencing; and there’s growing recognition of the language and other barriers faced by many young people as they try to navigate the justice system.

Follow-on research led by Banksia Hill Project team member and speech pathologist Natalie Kippin revealed significant levels of language difficulty among young detainees, with almost half meeting the criteria for language disorder. Much of that language disorder was associated with FASD.

The research also found considerable language diversity, with less than a third of the young people assessed speaking Standard Australian English as a first language.

Ms Kippin said these communication barriers meant many young people were going through highly verbal legal and rehabilitation processes at a significant disadvantage.

The findings have led to interest in the provision of intermediaries to help respond to language and communication needs when young people are engaging with police and the courts.