My teen thinks energy drinks will help him study – what do I need to know? 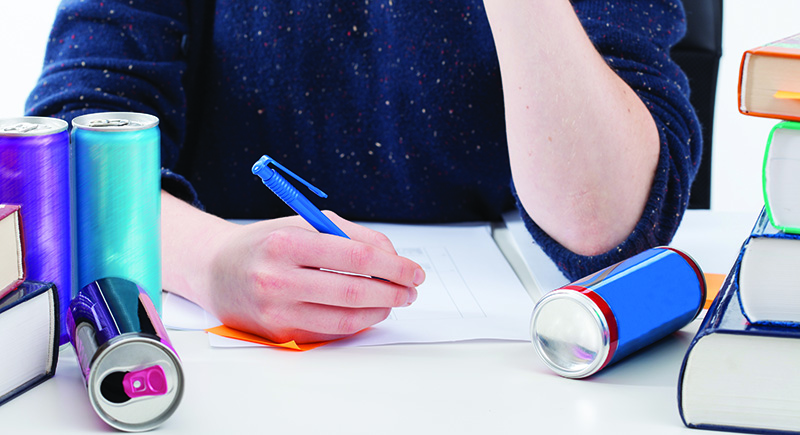 Energy drinks are flavoured, non-alcoholic beverages which contain high levels of caffeine and other ingredients to create a stimulating physiological effect. Whilst they are marketed to improve the body’s performance, there is no scientific evidence to suggest they offer any health benefit.

Telethon Kids public health researcher Dr Gina Trapp says energy drinks have been linked to serious adverse health effects – leading some countries to ban the sale of these drinks to children or altogether. Similar restrictions have been called for in Australia.

“Energy drinks provide a potent source of caffeine – a 500mL can of energy drink provides 160mg of caffeine, which is equivalent to two cups of coffee – which when consumed at high levels by children can lead to increased heart rate, excitability, sleep problems, bed-wetting, anxiety and dehydration,” Dr Trapp says.

“Energy drinks can also contain high levels of sodium, amino acids, herbal stimulants and sugar (around 14 teaspoons in one 500ml can). Consequently, the Australian Dietary Guidelines state that energy drinks are not suitable for children.

“Despite the health risk to children, we know from our own WA-based research that many children and parents are largely unaware of the potential impacts of energy drinks.

“This is despite compulsory warnings on product packaging that such drinks are ‘not recommended for children, pregnant or lactating women, or people who are sensitive to caffeine’.”

Is energy drink use among kids common?

“Energy drinks have catapulted to popularity among teenagers and young adults and represent one of the fastest growing segments of the beverage market,” Dr Trapp says. “In Australia, one in two adolescents have tried an energy drink.”

Preliminary findings from Telethon Kids’ recent Amped Up study, which surveyed 3,688 Western Australian high school students aged 12-17 about their energy drink use, reveal more than half of those surveyed (51.2%) had tried an energy drink. Of those, 19.2% reported consuming them weekly.

Overall, 55.4% of adolescents who had ever drunk an energy drink reported they had experienced at least one adverse event after consumption, including stomach upset (25.6%), heart palpitation (24.5%), difficulty sleeping/insomnia (24.3%, headache (24%), and agitation (22.9%).

The prevalence of reported adverse events was significantly greater among energy drink consumers than among coffee consumers (55.4% vs 47.4%), as was the proportion who reported seeking or considering seeking medical help for adverse events (16.9% v. 13.2%).

“Thus, more than half of Western Australian adolescents who had consumed energy drinks reported adverse outcomes, some serious enough to warrant seeking medical help,” Dr Trapp says. “The adverse outcomes were consistent with the physiologic effects of caffeine but were significantly more prevalent than with other sources of caffeine, such as coffee.”

Is my child allowed to buy energy drinks?

There are currently no restrictions in Australia on who can purchase energy drinks, meaning they are widely available and accessible to children from any store that sells non-alcoholic beverages.

How much is safe to consume?

Energy drink labels are required by law to state that they are ‘not recommended for children’.

In addition, although product labels state that 500ml/day is the maximum daily amount of energy drink that should be consumed, in fact there is no established ‘safe level’ of caffeine for children.

“A recent review into the safety of dietary caffeine reported adverse effects at levels of 3mg/kg of body weight,” Dr Trapp says. “After consuming a single retail unit of energy drink, 70 per cent of children (5-12 yrs) and 40 per cent of adolescents (13-19yrs) would be estimated to exceed this adverse effect level.”

How can I encourage my child to avoid energy drinks?

Dr Trapp says parents should discuss energy drinks with their children, including their ingredients and potential health risks.

“Our research with young people found parents and general practitioners were key sources of energy drink-related information,” she says. “Health messages delivered or modelled by parents in childhood were particularly effective in reducing energy drink consumption in younger adolescents, while older adolescents and young adults were more likely to listen to messages delivered by a GP.

“Our future energy drink research includes a plan to develop and pilot a parent-based intervention which aims to improve parents’ knowledge and behaviour around energy drinks, to help them reduce children’s energy drink consumption.

“In the meantime, we suggest parents promote alternative ways to improve energy levels, such as good nutrition, drinking water, plenty of physical activity and adequate sleep.”