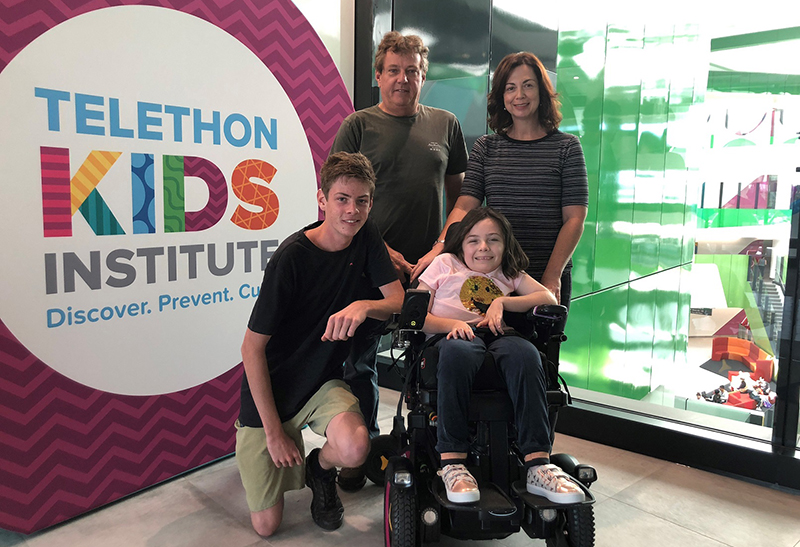 A Karratha family has jumped at the chance to participate in a study led by the Telethon Kids Institute, Muscular Dystrophy WA and Perth Children’s Hospital which aims to understand, predict and ultimately prevent the breathing problems children with neuromuscular conditions experience while sleeping.

Mackenzie Crane was 10 months old when her parents, Jodie and Scott, were given the life-changing news that their daughter would never walk.

The Karratha family had spent several months looking for answers after noticing that beyond learning to sit up at around five months, Mackenzie didn’t appear to be progressing.

After first going to their local child health nurse, they saw a physiotherapist who noted the chubby little eight-month-old had quite low muscle tone. Next stop was the local paediatrician.

“The paediatrician looked at her and did a few things and then looked at me and said ‘Right, I need you to get on a plane and go to PMH,” Jodie says. “I think the whole world went ‘boom’.

“We ended up in Perth, where they ran some tests. Eventually they told us ‘Your daughter will never walk’.”

Mackenzie was diagnosed with Spinal Muscular Atrophy Type 2, a genetic muscular disorder which affects the nerve cells that control voluntary muscles – although Jodie says it’s a working diagnosis only, as doctors have been unable to identify the specific genetic fault causing her muscle weakness.

“It doesn’t change anything – the symptoms are pretty much the same,” she says.

With no family history of neuromuscular disorders, the diagnosis came as a complete shock. The family, born and bred in the North West, briefly considered moving to Perth to be closer to specialists but are glad they abandoned the idea and stayed in Karratha, where the local hospital and other health and allied services rallied to help.

“People jumped on board pretty quick,” Jodie says. “In some respects I think Mackenzie was actually pretty lucky because she was such an unusual case and one of just a handful of clients in Karratha who had such high needs. They were really interested…she got special treatment, really.”

With the help of support groups including SMA Australia and Muscular Dystrophy WA, the family researched what they were dealing with and accessed whatever services they could to ensure they were equipped to manage the disease and subsequent physical disability.

“Our experience was initially one of shock and grief, followed by a steep learning curve and then adjustment to our new situation,” Jodie says. “We tried to stay positive and focused on what Mackenzie could do rather than what she couldn’t.

“(As a result) she’s been able to have many great life experiences like overseas travel, concerts and shows, community and social involvement – we just have to plan things more than most and we have a lot of adaptive equipment!”

The family brings Mackenzie to Perth a couple of times a year for respiratory and other appointments, including routine sleep studies. About a year ago they noticed she wasn’t waking up as refreshed as usual.

“She also reported having headaches in the morning and seemed to be running out of energy, so we suspected an issue was developing,” Jodie says. “Her next sleep study showed many episodes of obstructive sleep apnoea. For this reason she started using CPAP (continuous positive airway pressure) in March – that has greatly improved her daytime energy levels and reduced her headaches and fatigue.”

Mackenzie’s paediatric respiratory specialist, Dr Adelaide Withers of Perth Children’s Hospital and Telethon Kids, suggested the family join a study she was involved in which was investigating problems children with neuromuscular disorders experience with breathing while sleeping, due to muscle weakness.

The Clinical Predictors of Respiratory Failure in Paediatric Neuromuscular Disorders study – a collaboration between Telethon Kids, Muscular Dystrophy WA, Perth Children’s Hospital and Curtin University – hopes to lead to earlier diagnosis and treatment of breathing problems during sleep, and ultimately to prevent future lung failure in such children.

The Cranes – eager to understand more about Mackenzie’s condition and to help with research which may benefit other families, too – jumped at the chance to be involved in the study.

“The more we know about neuromuscular disease and respiratory health, the better,” Jodie says.

“The deterioration of breathing is a key concern for children like Mackenzie, so hopefully this study will help further identify risk factors and possible future treatments.”

Participation in the study hasn’t been onerous, with the appointments tying in neatly with Mackenzie’s regular trips to Perth.

“The great thing about this research is that we’ve been able to participate as part of our normal visits to Perth for respiratory appointments, so we haven’t had to take on too much extra. We’ve had a few lung function/breathing tests with Jasmine Grdosic from the Telethon Kids Institute over the last six months that are not invasive or time-consuming, and the staff are always lovely and accommodating.

“The research may or may not benefit Mackenzie at this point but down the track it will certainly benefit other people. It’s just good to be involved in it, and to have someone keeping an eye on her.”