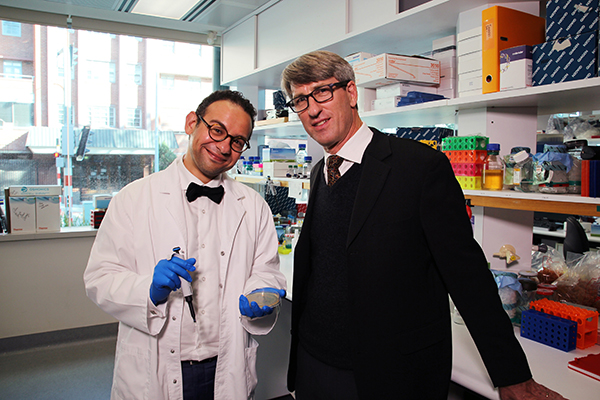 The Telethon Kids Institute and WA pharmaceuticals company Boulos and Cooper have signed a $685,000 agreement to develop what could be the first new class of antibiotics in decades.

In the last 30 years, only one fundamentally new class of antibiotics have been approved for clinical use.  In this time, many strains of bacteria have now developed a strong resistance to current antibiotics, reducing treatment options for patients infected with multi-resistant ‘superbugs’.

This potential new class of antibiotics will exploit a different vulnerability of bacteria – making it much harder for the microorganism to escape the effects of the antibiotics.

It’s hoped the new class of antibiotics will be able to attack some of the biggest pathogens in the world, including:

The new class of antibiotics is expected to offer several other key advantages over existing antibiotics, including better tolerance at high dosage levels, lower cost and versatility of manufacturing, and increased stability in a wide range of environmental conditions, minimising the need for refrigeration.

The prospective new class of antibiotic is the invention of Dr Ramiz Boulos, a Perth Scientist founder and CEO of Bolous and Cooper Pharmaceuticals, who is now hoping to commercialise the discovery.

The ‘eureka’ moment of Dr Boulos’s discovery - showing the ‘zone of inhibition’ where bacterial growth has only been prevented around the proximity of the new antibiotic compound (white dot on the right). The discovery bears visual similarities to the original penicillin discovery by Fleming in the 1920’s.

“This could be a completely new type of weapon in our antibiotics arsenal. The pre-clinical findings are an exciting discovery that I believe will lead to new drugs that save thousands of lives for decades to come,” Dr Boulos said.

“What I see with this technology is that it has the potential to completely disrupt the antibiotic industry – it could be one of the first fundamentally new class of antibiotics to be approved in decades.

“We chose the Telethon Kids Drug Discovery unit to partner with as they are one of the leading experts with commercial experience conducting microbial research to the standard required by leading global pharmaceutical companies.”

“Our drug discovery unit will be helping understand the mechanism of action of this exciting new drug so that it can be further optimised. We also hope to better understand any potential resistant mechanisms so that we can help to minimise them,” he said.

“We also aim to study how this new class could work in conjunction with existing antibiotics. We predict that simultaneous treatment with multiple classes of antibiotics targeting different vulnerabilities of the bacteria could greatly reduce the chance of resistance.

“It’s about the power of combined treatment. It becomes much harder for the bacteria to evade multiple simultaneous threats coming from different directions.”

Antibiotic-resistant bacteria has already been recognised by governments and industry as a serious problem accounting for more than 700,000 deaths worldwide each year.

It is predicted that by 2050, this number will jump to over 10 million deaths annually – with an associated cost of US$100 trillion annually.

Boulos and Cooper Pharmaceuticals is the only Australian company currently developing a new class of antibiotics.  Dr Boulos co-founded the privately owned company in 2013 with backing from his friends and family. The board features a number of prominent scientists, including Australian of the Year Professor Fiona Wood.

Boulos & Cooper Pharmaceuticals is an Australian proprietary company incorporated in October 2013 and based in Perth, Western Australia. The company is focused on the development of a new class of antibiotics with novel targets. Being a pioneer in the field, the company wholly owns a strong and expanding IP portfolio with patents granted in AU and the US in addition to a number of other provisional and PCT filings. Boulos & Cooper Pharmaceuticals has successfully established a robust framework with a number of industry partners for the development of its key areas of research, operating leanly and maximising investment in research.