On a quest for kids with cystic fibrosis

A new way of measuring early lung disease in young kids with cystic fibrosis is changing the way we detect and treat CF, creating a more targeted and personalised approach.

Lung damage is the big killer of people with cystic fibrosis (CF). Once damage to the lung has occurred, it’s irreversible resulting in many people with CF requiring a lung transplant to survive.

Detecting lung disease early is vital for intervention and therapy to give kids the best possible outcome. But accurately detecting disease in very young kids has not been possible with no standardised outcome measures currently available for children younger than 6 years.

This effectively excludes babies and young children from clinical trials, in an era where new, potentially disease-modifying drugs are becoming available. 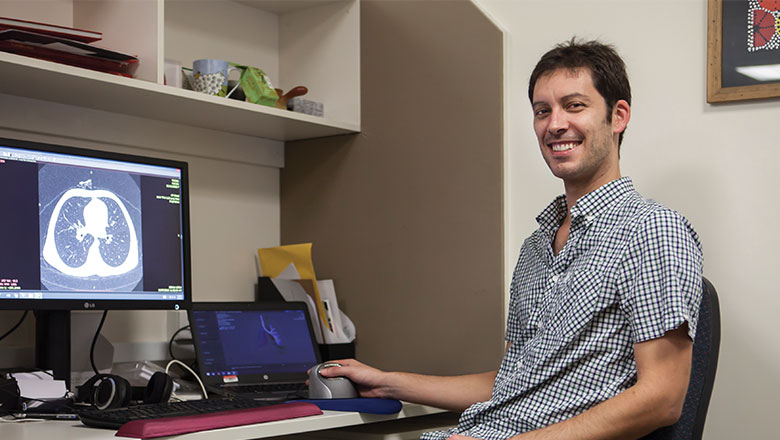 This drove Institute researcher Tim Rosenow to search for a solution.

A chest CT is the most sensitive measure of CF related lung disease, and can detect the earliest signs of lung abnormalities even before the onset of symptoms or infection.He started by looking at the current gold standard approach for detecting cystic fibrosis airway disease, chest CT (computed tomography). A chest CT scan provides a detailed 3D image of the organs of the chest cavity, right down to the airways and lung tissues.

“We found that using the CF-CT score in young kids pretty much gave us the same result for every child,” explains Tim. “The majority of kids would get a score of 1 as they had less than 50 per cent lung damage, which is what we would expect in the early days when CF lung disease is quite mild.”

“Each year when the kids were re-tested, they would get a score of 1 again. It didn’t give us any insight into whether their lung disease had changed by a little or a lot or what types of disease were affecting their lungs.”

“We needed something better, to give us a more accurate picture of the lung health of these young kids with CF.”

Tim had an idea.

Building on the gold standard chest CT, Tim had the idea of overlaying a grid in a way similar to stereology being used to count cells in tissues.

PRAGMA-CF was born. It was developed in collaboration with our research partners in Rotterdam with PRAGMA an acronym for Perth-Rotterdam Annotated Grid Morphometric Analysis.

“PRAGMA involves overlaying a grid on the CT images of a child’s lung, and allocating each grid square a colour based on the presence of various lung abnormalities,” explains Tim. “From this, the extent of lung disease, as a percentage of total lung volume, is calculated.”

Tim says this gives researchers the ability to detect lung disease extents as low as less than one per cent of the lung. It also allows them to accurately track the progression of CF lung disease from year-to-year with PRAGMA being able to show if disease has increased a little or a lot.

“We have demonstrated that lung disease progression from age one to three is related to levels of inflammation in the lung, and that children with higher PRAGMA-CF scores at baseline have more rapid deterioration in lung structure.”

The results have been published in the “Blue Journal,” the world’s highest-rated respiratory medical journal. PRAGMA is attracting international attention and builds upon broader CF research at Telethon Kids which is changing the way we think about the disease.

A fellow respiratory researcher says PRAGMA “… can give true insight into early changes and effects of treatment. It will also create a more targeted approach toward personalized medicine. Therefore, we should adopt these imaging methods into future clinical trials to continue the quest to offer sufferers of this devastating disease access to new treatments and a possible cure and, ultimately, an outlook on life that is similar to that of their healthy peers.”

PRAGMA is currently being used as an outcome measure in a number of clinical trials - the COMBAT-CF trial of azithromycin and the new SHIP-CT study of hypertonic saline in pre-schoolers. PRAGMA-CF has also been submitted to the European Medicines Agency, the organisation responsible for approving clinical trial outcome measures in Europe. Some pharma trials are also underway.

Tim hopes that PRAGMA-CF will become a standard measurement tool for CF lung disease in all young patients.

“Infants and young children stand to benefit the most from the many new medications and therapies becoming available, with the aim to prevent (rather than reverse) structural lung disease,” he says.

“Without a reliable outcome measure, clinical trials in this age group have not been possible. We have shown that PRAGMA-CF is a reliable and sensitive outcome measure in children below six years: the first of its kind in the world.”

“My hope is that my research will help bring new therapies to babies and young kids with CF so we can prevent lung disease early. Prevention really is better than cure.”

What is cystic fibrosis?

Cystic fibrosis affects the lungs and digestive system because of a malfunction in the exocrine system, responsible for producing saliva, sweat, tears and mucus. There is no cure.

People with cystic fibrosis develop an abnormal amount of thick and sticky mucus within the lungs, airways and digestive system. This mucus traps bacteria in the lungs resulting in recurrent infections. Lung failure is the major cause of death.

Cystic fibrosis affects one in every 2500 babies born in Australia.

The CF gene must be inherited from both parents - and it is carried by one in 25 people.