Long before the Fitzroy Valley region of remote north-western Australia was shown to have one of the highest rates of Fetal Alcohol Spectrum Disorders in the world, it was the local grandmothers who were the first to notice that the young children they were raising were responding and behaving differently to past generations.

Operating on a diagnostic hunch that excessive alcohol consumption in pregnancy may be to blame, and worried both about the extent of harm and threat to the intergenerational transfer of Aboriginal language and culture, they set alarm bells ringing.

Banding together in an historic show of strength, headed by June Oscar of the Marninwarntikura Women’s Resource Centre, Emily Carter and Maureen Carter of the Nindilingarri Cultural Health Services, they successfully fought for local alcohol restrictions in 2007. Then they became the driving force behind the comprehensive community-led Make FASD History campaign.

Guided by both elders and the evidence-based Marulu FASD Strategy, drawn up in consultation with research partners the Telethon Kids Institute, the University of Sydney and the George Institute, a three-pronged attack was launched.

It focused on prevention, diagnosis and providing therapy support to affected individuals and families coping with life-long physical and mental health problems. Also, a team of 20 local Aboriginal community researchers were trained and enlisted to run the programs.

Results just now emerging from this partnership are exceeding all expectations. Midwife-collected data has revealed a dramatic fall off of drinking in pregnancy in the Fitzroy Valley to below the rate of the general community in Australia. Whereas before, 65 per cent of pregnant mothers drank, now it’s only 18 per cent.

And in all three areas of prevention, diagnosis and therapy, huge inroads have been made. 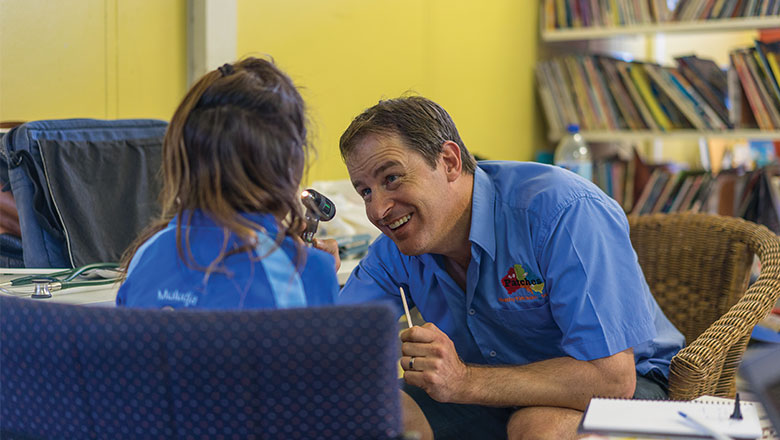 “This community is incredibly courageous because they put their hands up and they said ‘Right, we have got a problem with alcohol’ and they put themselves under the microscope,” said Dr James Fitzpatrick from the Telethon Kids Institute.

“They reached out to research partners to confirm their concerns and, very importantly, we were able to do that.

“And what is really remarkable about this story is that over the last eight years really – particularly the last five years – we have worked with them on their solution to the problems and we have been able to document that the prevention efforts around Fetal Alcohol Spectrum Disorders (FASD) have been successful.”

The gains are wide-reaching.

“There’s nobody in the community now that does not know that alcohol use in pregnancy can harm the baby,” said Dr Fitzpatrick. “And almost nobody who believes it’s OK to drink in pregnancy.

“We have documented that very accurately, through interviewing 400 people towards the end of last year to gauge their knowledge, attitudes and practice.

“And we have also documented, through midwife data, that where previously 65 per cent of women used to drink and drink heavily in pregnancy, now only 18 per cent of women drink in pregnancy and the risk levels are much lower. It is actually less than rates in the general community in Australia.

“In prevention and diagnosis and therapy, we have made huge inroads in each.

“So now we have got really solid data measuring the success of this community’s own campaign to ‘Make FASD History’.”

Such significant changes in mindset and behaviour are expected to pay off in the next generation of Fitzroy Valley children, by improving their health, quality of life and social and economic potential. Also, they have highlighted successful practical strategies to reduce and eliminate FASD that can now be implemented elsewhere in Aboriginal and non-Aboriginal communities.

“It really is the kind of campaign where you needed to have hundreds upon hundreds of individual conversations about this issue and show people evidence of the link between alcohol use and pregnancy and lifelong brain damage,” said Dr Fitzpatrick.

“We did it by getting into four-wheel-drives and taking the message to the end of the dirt roads, to the most remote communities”.

The Fitzroy Valley is located approximately 400km east of Broome in the remote Kimberley region of WA. It is home to 3500 predominantly Aboriginal people belonging to four language groups and living in more than 45 remote communities.

Marulu – the name of the FASD strategy - is a local Bunuba word meaning “precious, worth nurturing”.

“In the Fitzroy Valley, there were a lot of heavy drinkers who were reliant on alcohol and were fairly closed to the idea that excessive alcohol supply and use in the community might have been a cause of concern for their young people,” said Dr Fitzpatrick.

“In each community we went to, we would have a bbq and a movie night and a discussion about FASD and alcohol.

“So it was a matter of actually sitting in people’s front yards and in schools or in the local community store and just having the same conversation over and over. Also, engaging and employing local Aboriginal people as community researchers to have similar conversations and they become champions for this issue.”

Fitzroy Valley Aboriginal woman and community researcher Sue Cherel said it was vital that locals were involved in researching their own issues because they brought understanding and gained knowledge. And she stressed there was no shame in being involved in programs that helped your child.

“Also it’s really important that the Telethon Kids Institute decided to stay the long haul,” said Dr Fitzpatrick. “We have kept people up there and worked on the solutions as part of a high quality research program in response to the worrying statistics that we found.”

An initial important component of the Marulu strategy had been for the community to invite researchers to conduct Australia’s first population-based study into the prevalence of FASD, called the Lililwan Project. Carried out in conjunction with the George Institute and the University of Sydney, the results were reported in the Journal of Paediatrics and Child Health.

“Because it was a community question that we helped to answer - and to be honest that is the only way research should be done - our FASD prevalence study had a 95 per cent participation rate,” said Dr Fitzpatrick.

“This was even though women knew we would sit with them for an hour and ask them all about themselves and all about their behaviours and their drinking before the pregnancy.”

But work is far from over.

Over the next two years, all 250 school-aged children in the Fitzroy Valley are to be involved in a behavioural management Alert program to optimise student functioning. It is part of a randomised controlled trial and is based on the analogy of the body being like a car engine to teach self-regulation and improve executive functioning. Children are taught five ways to change their level of alertness through listening, moving, touching, looking or putting something in their mouth. The program also supports families, school staff and carers.

“That is part of the therapy intervention,” said Dr Fitzpatrick. “We wanted to make sure that we did not just measure the size of the problem in the Fitzroy Valley, but came as part of the solution.

“We also have a regular outreach team visit six times a year to the Fitzroy Valley to run diagnostic clinics. What that then does is it accurately documents the impairments that young people might have and it triggers eligibility to support funding - either education funding through the schools or disability services funding.

“And we have employed a local Aboriginal person from the community who is a therapist and a local-based speech pathologist. They are the on-the-ground therapy team.”

An umbrella term used to describe a range of physical and central nervous system abnormalities that are caused by prenatal exposure to alcohol. FASD leads to difficulties with executive functioning skills (ability to plan, organise, attend, inhibit responses and self-regulate emotion and behaviour) and impacts on education and work opportunities. Early diagnosis and intervention reduces the likelihood of these secondary disabilities.