A new job for a specialised drug 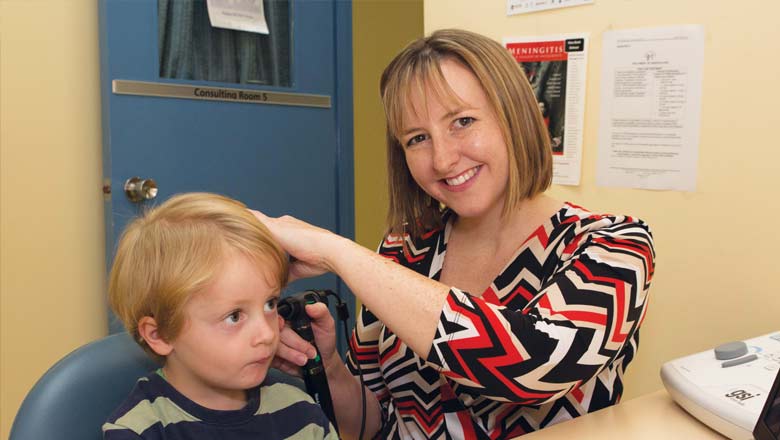 WA researchers may have uncovered a new treatment for the recurrent ear infection known as glue ear. A clinical trial is investigating whether a cystic fibrosis medication may be the answer to dissolving the glue in glue ear, reducing the need for antibiotics and surgery.

A preschooler ignores her mother’s instruction to pack away her toys and instead turns up the volume on her favourite TV show. A three-year-old, irritable after a bout of sleepless nights, throws a huge tantrum at the supermarket. And another young boy brings home a note from school reporting that he isn’t interacting well with his classmates.

But instead of having behavioural issues, it turns out these children have a middle ear infection known as otitis media or 'glue ear' – which can cause hearing and speech difficulties and ear aches.

Dr Ruth Thornton, of the Telethon Kids Institute’s Vaccine Trials Group, has been part of a University of WA team examining the role of bacterial biofilm in otitis media and believes this new finding has the potential to lead to the first major change in treatment of ear infections in two decades.

“Ear infections are the main reason kids will get taken to their GP and be prescribed antibiotics,” she said. “It is also the second most common reason children will need surgery.

“The main complication associated with middle ear infections is hearing loss, this occurs at a time when children are developing language and can have major effects on language acquisition, behaviour, education and subsequent life course.

“The current treatments have limited efficacy and we need to better understand this disease so we can improve these and ultimately prevent disease.”

Children with acute otitis media often require antibiotics or surgery. About 3,800 operations are carried out in WA each year, where tiny tubes, or grommets, are inserted into the eardrum to drain fluid and ventilate the middle ear.

The clinical trial involving 60 children under five years of age has applied Dornase alfa – a drug that breaks up thick secretions in the lungs of cystic fibrosis patients - in one ear at the time of grommet insertion. Each child has been followed up over two years, with hearing checks every three months. Dr Thornton said this follow-up stage was almost complete, which should let them know how well the Dornase alfa treatment has worked.

This trial follows on from the UWA team’s discovery that the recurrence of otitis media is due to the presence of bacteria in slimy biofilm.

Dr Thornton said laboratory research found that middle ear fluid was sticky because of the DNA that came from the children’s immune response to the bacteria causing the infection. “Instead of killing the bugs, this immune response was hijacked by the bacteria to help provide them with a home in the middle ear from which they could keep re-infecting the children’s ears,” she said.

“When the bugs are in this slime, they are up to 1000 times more resistant to antibiotics. This means that the infection is never completely resolved, the children get chronic or recurrent infections and they usually end up needing surgery for grommets to be placed in their eardrums. While this is great short term and allows the children to hear, up to a third of children having grommets will need to go back for repeat operations.”

Dr Thornton said a search for enzymes that could cut up DNA resulted in them identifying Dornase alfa as a possible agent. “When we put this into some middle ear fluid in a tube in the lab, we saw that it dissolved the DNA in the fluid which got us really excited and made us think that we might be able to dissolve the glue in these kids’ middle ears,” she said.

This research also offers hope to those aiming to prevent hearing loss in Aboriginal communities.

“We know that Aboriginal children experience unacceptably high burdens of middle ear infections and that in some communities it affects nearly every single child,” Dr Thornton said. “These children are affected for longer than nonAboriginal children on a whole and experience much more severe disease which makes them at much higher risk for the lifelong consequences, particularly in relation to health, education and learning.”

“The next phase will be to implement the use of Dornase alfa in ear washes for those children with chronic suppurative otitis media (chronically runny ears), which is the most severe form of middle ear infection,” Dr Thornton said.

“We will also hopefully do a larger-scale, multi-centre trial with different treatment regimens.”