Sarah Le Roi knows all too well how debilitating Clostridium difficile infection (CDI) can be. She was struck down with the emerging 'superbug' while on holiday in the United States.

"At first I thought I just had a stomach bug," Sarah says. "I had diarrhoea and vomiting but then I became very weak, very quickly. I couldn't lift my arms, I was passing out. Just before the ambulance came to get me, I thought I'm not going to wake up from this." 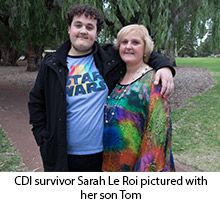 Clostridium difficile infection (CDI) is a spore forming bacteria that attacks the bowl and affects an estimated 12,500 Australians a year. It is growing in incidence and is becoming increasingly deadly.

Many patients get CDI as a result of taking antibiotics for other illnesses. The antibiotics kill off 'good' intestinal bacteria that keep CDI at bay. As a result, the disease can spread quickly through hospitals, with the elderly and unwell at greatest risk.

Sarah did not know it at the time, but she was at greater risk of CDI because she had previously undergone surgery and taken antibiotics for Crohn's disease.

Luckily Sarah survived CDI but the path to recovery was not easy.  She spent two weeks in intensive care before being allowed to fly home. She then relapsed five months later.

Infectious disease specialists at the Telethon Kids Institute are seeking Western Australians potentially at risk of CDI to participate in a vaccine trial.

76 year old Norman Patison recently underwent major surgery to fix a blocked artery in his neck, which put him at increased risk of catching CDI. He volunteered for the trial of a vaccine that might prevent the disease. 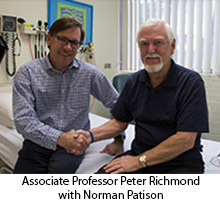 "Frankly I'd never even heard of CDI," Norman says "Hospital is difficult enough and if I had something like that it would have been a nightmare."

Telethon Kids Institute researchers are looking for more eligible candidates like Norman to volunteer for the trial - that is people over 50 who have an upcoming major surgery or who have been hospitalised twice over the past two years and received antibiotics.

"This study is part of a world-wide study to test how effective this new vaccine is against CDI infections," says Associate Professor Peter Richmond, Head of the Vaccine Trials Group at the Telethon Kids Institute.

"This is an infection that is really emerging rapidly in many countries… It is one of those superbugs that we have to be prepared to deal with and prevent. It's much better to prevent the infection In the first place, then having to try treat the infection and its complications."

To find out more about the Perth-based trial, visit this link or contact the Telethon Kids Institute on 08 9340 8542.