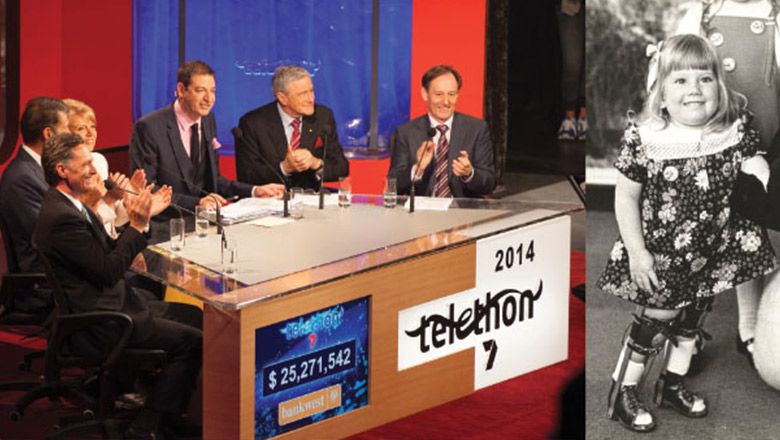 In 1967, on the perfectly manicured greens of the exclusive Lake Karrinyup Country Club, a golf game between mates was to lead to the birth of one of the most successful fundraising initiatives, per capita, on the planet: Channel 7 Perth's Telethon.

Then Managing Director of Channel 7 Perth, Jim Cruthers (later Sir James), was having a hit with James Clarkson, then the CEO of Princess Margaret Hospital for Children.

Jim had recently been told about a telethon that started in the United States a year earlier, fronted by legendary entertainer Jerry Lewis. It was raising significant funds for Muscular Dystrophy research. In Australia, Channel 7 Melbourne, in conjunction with the Herald Sun newspaper was also running a fundraising appeal on Good Friday of each year.

"Could we do something similar in Perth to raise money for PMH?" the two golfers asked each other. By the time they'd finished their round, the idea was fully hatched. That one golf game had sparked something wonderful.

"It really happened just like that!" laughs Kevin Campbell, who went on to become Managing Director of Channel 7 Perth, as well as Chairman of the Telethon Kids Board. In 1968, Kevin was a staff member at Channel 7. He fondly remembers the first Perth Telethon, held in November that year. "It was mayhem, because we didn't know what we were doing," he says. "The station was open to the public, we had all these people coming in with bloody tins and rattling them. It was sort of - chaos!"

Australia had only recently gone into decimal currency. There were no computers so telephonists took calls on phones with fat, square, push-button numbers. Receipts were written out by hand. Anyone pledging over $2,000 - an enormous sum in those days - was politely called back to ensure the donation wasn't a hoax.

Perth hadn't ever seen anything like this - 24 hours of non-stop, madcap television entertainment - and locals enthusiastically voted with their wallets.  Indeed, more money was received than was anticipated.

The first ever Telethon raised a staggering $104,829. Bret Treasure, son of the Co-Managing Director, Brian Treasure, was then just eight years old. He remembers sitting in his father's office as the money was being tallied. "That's the first time I saw my dad cry," he says, "When he realised they were going to raise $100,000!"

The Telethon money was donated to the Princess Margaret Hospital Children's Medical Research Foundation and funded two hospital research groups. One was a clinical immunology research unit. The other, a clinical nutrition research group headed by a paediatric gastroenterologist who was particularly interested in Aboriginal children and their health - well before the issue was of major concern to mainstream Australia.

Throughout the 1970s and into the 1980s Perth continued to embrace Telethon as "must-see TV".  Big name stars including Michael Jackson, Celine Dion, and Whitney Houston were among the headline acts.

On screen, the big-name stars were extraordinary. But Telethon also provided an opportunity for local singers, dancers and entertainers to make their small-screen debut. Audiences streamed into Channel 7's Dianella studios to witness the magic -  and occasionally, the madness - of live TV.

As Telethon's popularity grew, so did its tallies, eventually nudging past seven figures. More money meant more funding for research into child health.  But many WA research projects were still operating independently, with little collaboration.

Professor Lou Landau, Chair of Paediatrics at the University of Western Australia, and an epidemiologist named Professor Fiona Stanley had an idea - creating an institute that would look into many child diseases, their causes, treatments and prevention. After much discussion and expert consultation, the WA Institute for Child Health Research opened in 1989, with 90 researchers.

The formal marriage between Telethon and the WA Institute for Child Health Research (now Telethon Kids Institute) came later when the Channel 7 Telethon Trust committed to funding many of the Institute's cutting-edge research projects. While the two organisations were and remain independent, the Institute has conferred naming rights of the organisation in gratitude for Telethon's constant support over the years. The two charities are very close and frequently work together to ensure the health and wellbeing of children.

Professor Fiona Stanley says while Telethon's on-going financial support is vital, the public exposure it has given to the issue of child health in WA has also been very important. "They interviewed our scientists on Telethon," she says "and we got out a lot of good messages about what we were doing and what it took to have a healthy baby."

Improving the lives of Western Australian children has become a whole-of-community collaboration, thanks to the annual appeal. The amounts raised continue to amaze. In 2016, the Telethon tally topped $26 million. There are now three generations of Western Australians donating to the charity, and corporate Australia is also playing an increasing role.

It's a philanthropic trend that was accelerated several years ago by businessman Kerry Stokes AC. As head of Seven West Media, which owns Channel 7, Mr Stokes also Chairs the Telethon Trust and is passionate about the charity. "It has become a symbol in our community that when our community comes together, we can do really good things; we can do things that are lasting and enduring. Telethon stands for kids and a better life. "

"Telethon has been a catalyst for Perth and Western Australia to look into the future to see the sort of life we want for our children and our children's children. All of us want to see disease eradicated and unnecessary hardships removed.  It is the mark of any community as to how it wishes to care for those who are less fortunate, and in our case, that focus has been on the children, the vulnerable and the disadvantaged," says Kerry Stokes.

Since its beginning, Telethon has raised over $200 million. By any measure, that's a staggeringly good result from one game of golf.

Children's research relies on the ongoing support of people just like you. To see how you can directly help improve the lives of kids everywhere, visit Ways to Donate.