Making FASD History inspires the rest of the world to follow suit.

The baby of the bunch, a beautiful brown-eyed boy, was just three-years-old. He was, Sissy says, a bright and loving boy but from the time he hit first grade it was evident he had some major problems.

“His behaviour was so bad it was mind boggling,” Sissy recalls. “He seemed to have no listening skills whatsoever, plus major sleep issues. I was an experienced parent by then but I couldn’t put my finger on what was going on with him.”

Back then, Fetal Alcohol Spectrum Disorder (FASD) – a lifelong condition relating to permanent brain damage caused by alcohol exposure during pregnancy – was not on many physicians’ radars, let alone common knowledge among people living in remote communities in the Pilbara or Kimberley regions. In fact, research undertaken by the Telethon Kids Institute in 2005 revealed that only 12 percent of WA health professionals were aware of the diagnostic criteria for FASD at the time. Instead, it was widely misdiagnosed as ADHD, which was the diagnosis Sissy’s young son initially received when she sought help.

Fast-forward to 2008, and young doctor James Fitzpatrick was working in the Kimberley’s Fitzroy Crossing when he diagnosed his first case of FASD. “This child was 16-months-old and his mother had had a very traumatic life, which led her to drink heavily, including in pregnancy,” he recalls.

James was dismayed to find there were no agencies or individuals working to support people with FASD in the community and immediately teamed up with community partners June Oscar AC and Maureen Carter to create a strategy to Make FASD History in the Fitzroy Valley.

The former infantry soldier leaned on his training to develop a thorough, multi-pronged approach – preventing FASD through raising awareness and providing support to pregnant women; diagnosing FASD and establishing multidisciplinary clinical service models that could operate in remote environments; and developing therapy and caregiver support programs for those affected by FASD to try and prevent adverse outcomes later in life. Also on board: Former Governor of Western Australia Malcolm McCusker AC CVO QC and wife Tonya, who visited the Fitzroy community, saw firsthand the children impacted by FASD, and promptly offered to fund James’ role in the project as the McCusker Clinical Fellow in Aboriginal Child Health Research through the McCusker Charitable Trust.

“I cannot overstate how important the McCuskers’ support has been,” James explains. “Their investment in supporting my role has meant that I have been able to leverage many times the amount of funding support that they have contributed. Backing promising research leaders is an approach that should be applauded.”

And what a ripple effect it has had. Nearly 10 years since James made that initial diagnosis, the Making FASD History strategy, largely comprised of community- led prevention initiatives and alcohol restrictions, has delivered extraordinary results, with rates of drinking in pregnancy in the Fitzroy Valley down from 65 to less than 20 percent.

“It’s all come together – a growing public and political awareness that FASD is an issue that needs to be addressed as well as a growing sense of urgency from the communities in recognising that FASD is truly one of the most potent drivers of childhood developmental disability,” James explains. “And now, the strategy is being seen nationally and internationally as an evidence- based and community-led approach to FASD that actually works.”

Adds Tonya: “These results are excellent and a huge testament to the partnership between Fitzroy and Telethon Kids Institute. It would be great if other communities could adopt this model and produce similar results.”

For BHP, it was a no-brainer that they would get behind a similar program run by James and his team in the Pilbara, contributing $1 million a year for five years towards Making FASD History in the Pilbara or ‘Warajanga Marnti Warrarnja - Together We Walk on Country’ project. 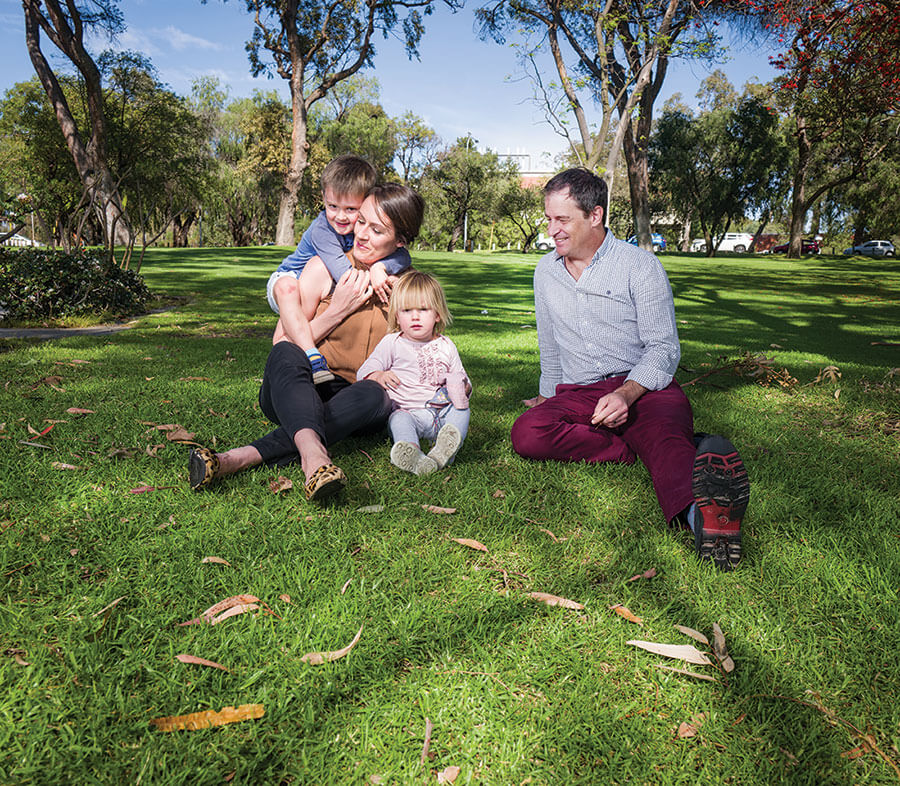 BHP Social Investment Specialist Rebecca Samulski in the park with
her children, Miles and Annie, and Dr James Fitzpatrick

“We are proud to partner with Telethon Kids on this project that aims to reduce the prevalence and impact of FASD in Port Hedland and the Pilbara more broadly,” Dave Bunting, BHP’s Manager of Social Investment, says.

“Our Reconciliation Action Plan outlines our commitments to Aboriginal and Torres Strait Island Peoples, and we know that by working together we will make a genuine difference to the wellbeing of Aboriginal families in the Pilbara.”

For Sissy, who describes raising a child with FASD as “extremely intense”, wider recognition and understanding of the condition has brought widespread relief.

“Nobody knew about it in my day. The poor parents had no idea what went on with the alcohol in their tummies, that alcohol was the key to what was damaging the children,” she says.

“Everyone kept saying my son was just a naughty boy but I knew there was more involved. It’s heartbreaking because the behavioural problems are out of control and it’s not the children’s fault — their brain isn’t alert of what’s going on so they can’t put the brakes on their actions. There’s so much damage.”

Under Sissy’s watchful eye, and with the right structure and support, her son has grown up to be a strapping 17-year-old TAFE student, getting good grades, keeping his behaviour on track and preparing to take on a BHP apprenticeship.

“He’s a real good kid and everyone can see that,” she says proudly.

It’s the kind of result that warms James’ heart and motivates him to keep spreading the strategy throughout the world.

“Our exciting next steps include leading a national scale-up of Making FASD History with partners in the Northern Territory and New South Wales. We have also initiated an international collaboration to Make FASD History, in partnership with researchers in the Netherlands, Canada, the US and South Africa. The vision for our international work is a large, multi-site, multi-country Making FASD History intervention, with the goal of reaching one million people across all sites with FASD prevention and intervention.”

James attributes the success of the model to the large team of FASD researchers at Telethon  Kids Institute, who are taking a scientific approach to a complex public health intervention.

Inspired by the capacity of his colleagues at the Institute, and their community partners, James is optimistic.

“It’s actually happening,” he grins. “We have a commitment to getting this job done, and a track record of coming in to support communities that are ready to Make FASD History. It’s within the realms of possibility.”