Back to the start

Early intervention in autism is proving a game changer.

When Professor Andrew Whitehouse was 18-years-old and studying speech pathology at university, the child of a family friend was diagnosed with autism. “Mum, being my mum, said, ‘why don’t you be a good lad and go and provide the family with a bit of therapy?’ Being a good lad, I said, ‘sure, no worries’,” he chuckles. “So off I went.”

For Andrew, who was at an age where his main interests included “girls and beer”, it was a life-altering experience. He was so profoundly moved by the family’s journey with autism that he vowed to dedicate his professional life to it.

And has he ever – Andrew is now the head of the Autism Research Team at Telethon Kids Institute, where he and his team are making groundbreaking discoveries in early intervention of the condition.

“Kids are not generally diagnosed with autism until three years of age at the earliest, and after that age a lot of interventions occur,” Andrew explains.

“What we know from neuroscience is the earlier we’re able to identify and provide intervention, the greater the developmental gains we can make in a child. So what we’re seeking to do in our research is to identify kids as early as possible.”

It’s music to the ears of Mili Gandossi, who fought for a diagnosis for son Valentino, now three. “I started to notice changes in Valentino between 15 and 18 months, and every month then on there was something new,” she recalls.

“He started to have more sensory-seeking behaviour like spinning around by himself, he would prefer to be alone rather than with us, eye contact we would have to force, his speech declined to all but one word, the foods he would eat became less and less. But because he didn’t have any big, outstanding behavioural differences in the eyes of professionals, I kept hearing, ‘he is a boy, they are generally delayed, just wait until he is two and see how he goes’.”

Andrew is hoping these common stories of delays in health professionals recognising symptoms will become a thing of the past. “We’re looking at kids in infancy whose development might be a little bit different, and while we’re not going to call that autism, we can certainly identify early risk factors and can apply interventions that might mitigate, if not prevent, long- term disability,” he says.

“By developing interventions for young infants, we are hoping to change their life course from the very earliest point – a prospect that is just so exciting. We’re developing new ways for families to interact with their baby in order to really enrich the social environment that baby is exposed to.”

None of this progress would be possible without donors like Paul Harris, Malcolm and Tonya McCusker, the Angela Wright Bennett Foundation, and others.

Like Andrew, Angela Wright Bennett was touched witnessing a close friend’s journey with autism after that friend’s grandchild was diagnosed. Angela got on board “as a result of Angela’s observations of the experience of her friend in combination with the empathy and the passion that Andrew showed during our initial meeting,” says John Gummer, from the Angela Wright Bennett Foundation. “Andrew is a tremendously amazing guy, and when you get someone with that charisma who is doing such wonderful things, it’s a beautiful thing.” 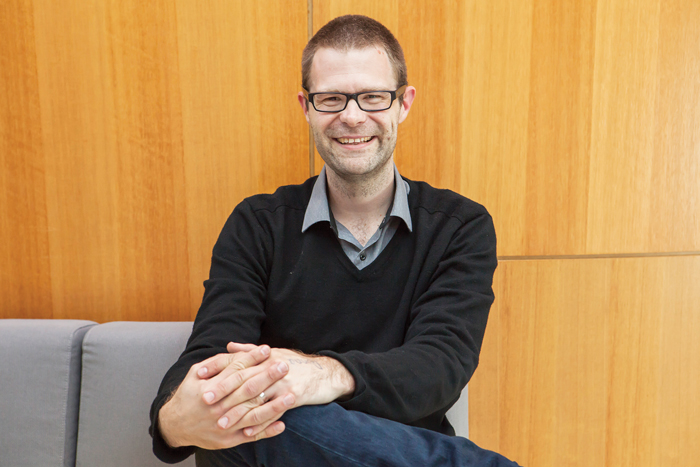 One common myth Andrew wants to debunk about autism is the notion that it is a single entity. “It’s important to understand that autism is not one thing. We now know there are many different biological ways a child can develop autism – the cause of one child’s autism is likely to be very different to that of another child,” he explains. “The sooner we can look past the overarching label of autism and look at a child for what they are – a beautiful amalgam of strengths and challenges – the better we will be at understanding and helping them.”

Mili agrees. “The fact that there is a spectrum means that not one solution will fit your child’s and family needs – hence the need to research, follow the results and trust your gut,” she says.

Valentino has made some huge gains with therapy and Mili says the autism journey has ultimately made their family stronger. At the tender age of five, big sister Juliette is overflowing with compassion and understanding for her baby brother, joyously sharing in all his accomplishments. “Valentino has shown all of us so much – his infectious laughs and smiles tug at your heart. His strength and will to learn and better himself astounds me. He fights every day to communicate, for us to understand him, and I admire him so much for this,” Mili says.

Looking into the future is not without worries but Mili also appreciates that Valentino has his own abilities and he will not be held back by social conventions. “He looks through his own special lens and dances to the beat of his own drum,” she says lovingly.