All through the night

For the parent of a child living with diabetes, sleep no longer represents the relaxing slumber that it used to. Instead, it becomes a potential danger zone; where eight hours of non-wakefulness means blood sugar levels can silently go awry.

“Nighttime is the worst time of all,” says Janine Goyder, whose 19-year- old son William was diagnosed with type 1 diabetes when he was eight. “I was confident early on that William was capable of looking after himself during the day but you never stop worrying during the night. Even now, if William has an exam on or is tired, we’ll get up and check his blood sugars during the night.”

Diabetes is exhausting and unrelenting for sufferers and their families. There is never a break from it; everything a child with type 1 diabetes does — whether it’s exercising, eating, getting excited or being anxious or cross — affects their blood glucose level.

“People have no idea of the enormous burden of type 1 diabetes unless they are living with it or have contact with a family living with it. Every time these children are out of their parents’ sight, it’s very stressful and worrying for them thinking about that balance of blood glucose levels and the safety of their child,” explains Professor Liz Davis, from the Children’s Diabetes Centre, based at Telethon Kids Institute. “It’s the sort of condition that is there every day of the year, every hour of the day, every minute of the hour.”

Following William’s diagnosis, Janine became his “shadow”. Every day she would head to his school to test his blood sugar levels until she was confident he could manage it himself. Sleepovers were not an option until he was in his mid-teens and she went to every school camp with him. “I blended into the background as much as I could,” she recalls. “But I had to be there during the night.”

Amanda Zuvela understands the constant worry and anxiety all too well. Her daughter Cleo, now 10, was also diagnosed at eight.

“When your child is diagnosed with a chronic disease it changes everything,” Amanda says. “There is a sense of losing control. We felt like we were at the bottom of a mountain that was too wide to go around and the only option was to go over it.” 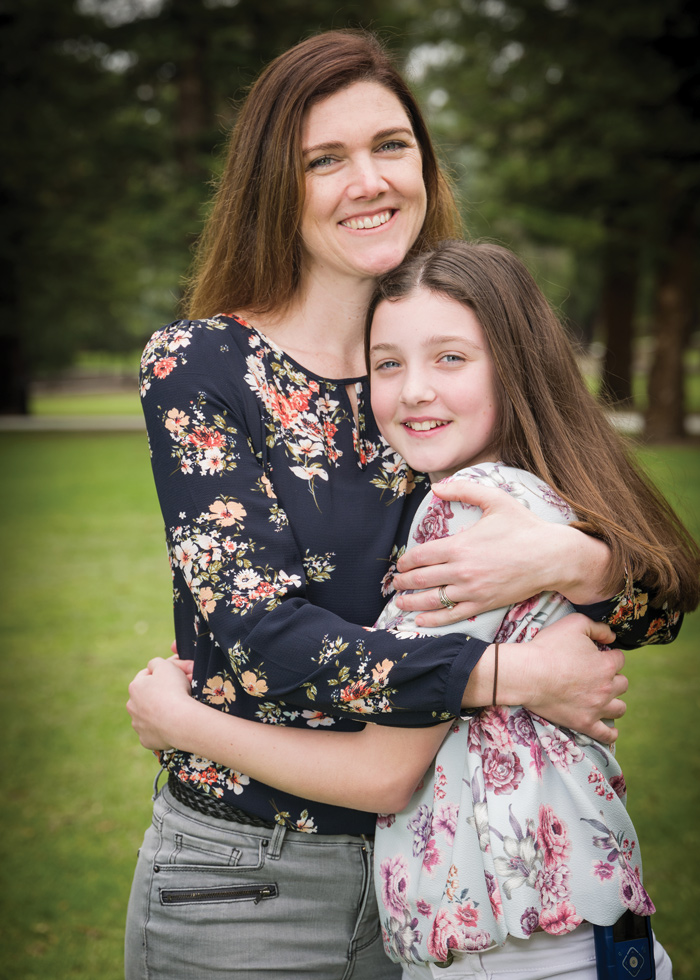 Amanda admits that diabetes literally occupies her mind 24 hours a day. “It’s a life- threatening disease,” she explains. “If Cleo’s levels fall too low she is at risk of having seizures, falling into a diabetic coma and potentially dying. That is a scary enough thought. On the other side, if her levels are too high she runs the risk of other health complications in the medium to longer term.”

Amanda describes the experience as “pretty much like walking on a tightrope” as they try to keep the balance. “We found Cleo’s blood glucose levels can really fluctuate up or down quite rapidly depending on the foods she eats, or due to her activity levels,” Amanda says. “So diet and exercise are really important to achieving good blood glucose control.  We try to maintain a healthy diet and encourage Cleo to be active but this is not always easy, especially away from home at parties, events or restaurants. Bad food choices are everywhere and are really tempting for kids. Trying to get kids with type 1 diabetes to understand the long-term implications of food choices is difficult.”

In Western Australia, 120 children are diagnosed with type 1 diabetes every year, and that number is increasing. But Liz admits they are still perplexed as to why. “We know that the body is exposed to something that is altering the immune system. We know that it happens very early. We think there are underlying genetic factors but the fact the rate is going up suggests there are also environmental factors playing a role. But none of those have truly been identified,” she says.

Liz says while a cure for diabetes remains the Holy Grail, the Children’s Diabetes Centre, which she co-directs alongside Professor Tim Jones, is also focused on improving the lives of children with diabetes.

“We’ve identified what the key issues for the families are and we have two themes within that,” she says. “Some of the research is aimed at improving the clinical outcome of kids with diabetes, things such as better glycaemic control and reducing the risk of long-term complications such as eye disease and renal diseases. The other focus area is reducing the burden of living with diabetes.

“We’re trying to learn more about the lifestyle factors that impact on families and diabetes care. These include the effect different types of food have on blood glucose levels and how to give the best insulin dose to manage some of the different foods. Exercise is very challenging for young people with diabetes because it can either make your blood glucose level go low or high, so we’re doing a lot of studies focused on better understanding how young people with diabetes can exercise safely.

“We’re also carrying out trials with technologies in the pipeline, such as new insulin pumps, glucose sensors and devices that connect the glucose sensors with the pump, with the ultimate aim of having a closed loop system or an artificial pancreas — this is the aim short of an outright cure, something that can do all the thinking and worrying for you.”

As for reducing the burden of diabetes, Liz says they are strongly focused on the challenges for both children and teachers at school. “Children are away outside the care of their parents for long periods each day and it’s a major concern for parents. It’s also a big responsibility for schools. While teachers care very much for each of their students and are happy to be involved, they aren’t medically trained so it’s getting the information across about what they can do,” she explains.

“We’re also trying to reduce some of the burden for kids at school. When you’re pulling out needles to do your finger pricks at school it sets you aside from the other kids, so we’re doing some mental health work around that. Stress and emotion can create a rollercoaster for your blood glucose levels and we’ve discovered that the mental health issues in adolescents and young adults with diabetes is several times higher than the general population.

“The mortality rates in young women with type 1 diabetes are 11 times greater than the background population and most of that mortality is related to mental health issues, not diabetes complications. The burden is enormous and we are running a number of different studies trying to understand how we can help relieve the anxiety that often leads to the mental health issues.”

Janine and husband Richard have been active in trying to help find a cure and improve treatment from the time William was diagnosed. Along with a chief donor, JDRF Australia, they have seen some exciting developments during that time. “Ongoing research is vital,” Janine stresses. “Since William was diagnosed the advancement has been amazing but without money we can’t do the research needed to get that cure. And I think things like diabetes can go under the radar a bit because people look at William and see this strapping 19-year-old and think he’s OK now. But that’s not how diabetes works.”

Amanda provides an insight into the enormity of what these developments translate to. “Since Cleo’s diagnosis we have moved from a daily regimen of four-to-six needles a day for insulin and about 10-12 finger prick tests each day to Cleo using an insulin pump and a continuous glucose monitor which has given her more flexibility and improved management. Before using the glucose monitor, we would do finger prick tests twice through the night, and doing that took its toll,” she explains.

Liz says the Children’s Diabetes Centre is unique in its approach. “We’re the only Centre that is holistically focusing on the family and we’ve got an active consumer and community group, so we’re working with families to find out what the biggest problems are,” she says.

“This means we are conducting research work that is really directly applicable to families. It’s about feeding information back into the community rather than just into a scientific journal.”