Community bands together to create a brighter future for our kids 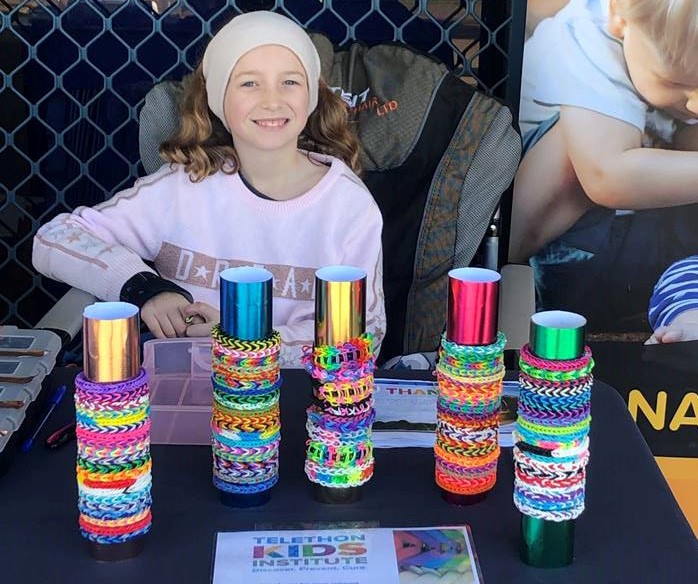 Raising funds for a good cause has long been on Isabelle Critchell’s wish-list. Inspired by an uncle who lives with a disability and her favourite Netflix television show about a young girl battling cancer, the year four student from Byford was determined to raise money to help people live healthier, happier lives.

She found the ideal fit in Telethon Kids Institute, which she discovered with the help of mum Danielle Critchell.

“Isabelle had wanted to fundraise for a long time,” Danielle said. “In the school holidays she celebrated her 10th birthday and we decided it was time. I showed her how to research possibilities and find a cause and she organised everything herself. Her dad, Roy, and I are incredibly proud of her.”

“I had a lot of loom bands lying around my room and I thought it was a good idea to use them up and make money with them,” she explained.

With guidance from her parents, she signed up to be an official Telethon Kids Institute fundraiser, organised a stall at the markets, made her own signs and posted updates on Facebook and her fundraising page.

So far, Isabelle has sold more than 55 bracelets and has raised more than $100. But the determined student is just getting started, with more events scheduled over the next couple of months including the Rockingham night market on September 21 and the Port Kennedy night market on October 25. She hopes to raise $350.

Isabelle said while she’s been extra busy since fundraising, she’s been having a great time selling her bracelets and has enjoyed meeting a lot of new friends along the way.

“It’s so good to be helping other people and having so much fun as well. Everyone I meet at the markets is so kind. They say things like, ‘keep going’ and ‘I’m so proud of you’, and that feels nice.”

Follow Isabelle’s fundraising efforts at her Telethon Kids fundraising page, or follow her lead and create your own fundraiser.

Want more information about fundraising for Telethon Kids? We’d love to hear from you!